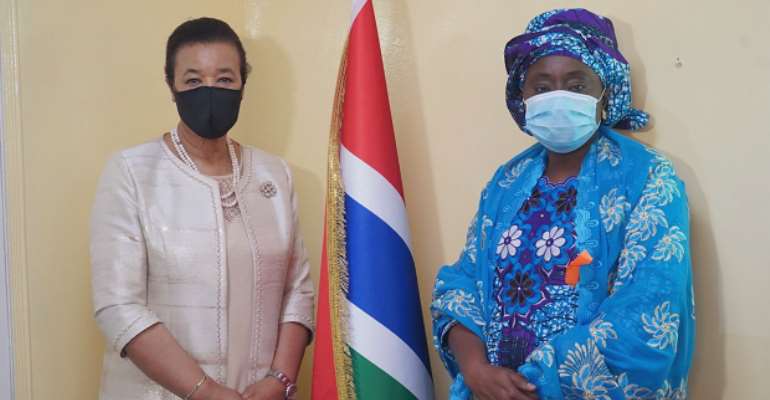 The Gambia has announced plans to launch a national ‘NO MORE’ campaign against domestic and sexual violence.

Fatou Kinteh, Gambian Minister for Women’s Affairs, Children and Social Welfare, joined the Commonwealth Secretary-General in Banjul when she made her commitment on Human Rights Day.

When launched next year, ‘The Gambia Says NO MORE’ campaign will aim to tackle domestic and sexual violence, while creating long-term prevention measures to eliminate abuse.

The Gambian national chapter will be part of the global ‘Commonwealth Says NO MORE’ movement and will support national efforts to achieve the sustainable development goal for gender equality.

Commonwealth Secretary-General Patricia Scotland, who is currently in The Gambia on an official visit, said:

“With the pandemic triggering an alarming rise in cases of domestic and sexual violence, the announcement signifies The Gambia’s strong commitment to ending this scourge.

“The abuse, far too often, is hidden and is regarded as a private matter, trapping victims in shame and persuading bystanders to turn a blind eye.

“So it is critical to put the spotlight on this hidden pandemic to send a clear message to victims that help is available while engaging everyone in the society to play their role in addressing domestic and sexual violence.”

She said the campaign would be of vital importance to every Gambian, particularly more than 60 per cent of the citizens under the age of 30.

The Secretary-General continued: “We need to make sure their future is not like our past. Together with Minister Kinteh, we are saying NO MORE violence because if we do not have peace in our homes, we will never have peace in the world.”

In The Gambia, around one in three women experience sexual or physical violence in their lifetime, similar to the global prevalence rate. The abuse remains largely unreported due to impunity, silence, stigma and fear.

Minister Kinteh said: “Ending gender-based violence is everyone’s business. The Gambia is a patriarchal society. We want to make sure all efforts are being made to sensitise every citizen on the human rights of women.

“The Gambia is joining the Commonwealth in saying NO MORE to gender-based violence. Early next year, we will bring together partners and communities to launch ‘The Gambia Says NO MORE’ campaign.”

Addressing Gambian women through media, she said: “You must no longer suffer in silence. You can get help. Voice your complaint and seek support - respectfully and confidentially.”

The Minister highlighted that her government has embarked on a raft of initiatives to protect women and girls, including a new Domestic Violence Act, a national helpline and gender-sensitive support services.

NO MORE Global Executive Director Pamela Zaballa said: “The NO MORE Foundation is excited to support the development of ‘The Gambia Says NO MORE’ and to be part of their commitment to ending violence against women and girls.

“We are assured that the partnership supported by the Secretary-General and Minister Fatou Kinteh will develop into a strong and resilient chapter.

“We look forward to working in partnership and ending violence against women and girls in The Gambia.”

Moving forward, The Secretariat and NO MORE Foundation will work together with the Ministry to develop and deliver the campaign.

The Commonwealth is a voluntary association of 54 independent and equal sovereign states. Our combined population is 2.4 billion, of which more than 60 per cent is aged 29 or under.

Modern Ghana Quote Reports
Catch up with all the political quotes from our politicians.
Sponsored
More Gambia
Modern Ghana Links
Gambian truth panel probes 2005 migrant massacre
Gambia court ruling may clear way for Jammeh prosecution
Secretary-General makes first official visit to The Gambia after it re-joined Commonwealth
We have not filed case against Ghana and Gambia at ECOWAS Court, but we will if….Victims of Gambia Massacre
Gambia: parents raise safety concerns amid schools reopening during the Covid-19 pandemic
Widespread disappointment in Gambia after new constitution voted down
Gambia: Report Recommends Changes To Laws That Discriminate Against Women
Gambia government ravaged by COVID-19
Re: Concerns Over The Arbitary Arrest/Harrassment Of Mr. Madi Jobarteh And The Deteriorating State Of Freedom Of Expression In The Gambia
Quote Reports Dossiers
TOP STORIES