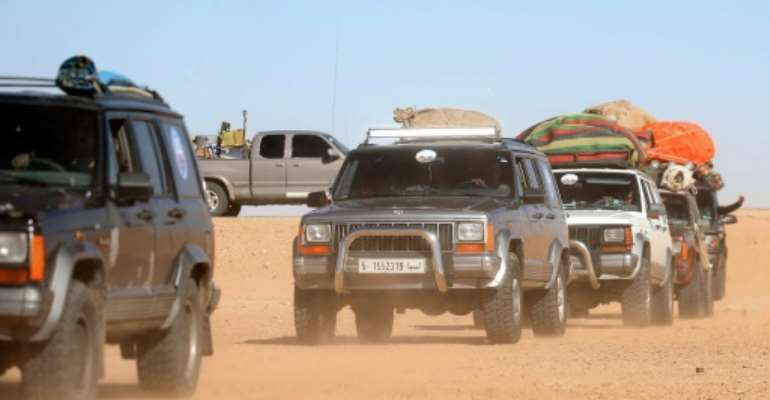 Libyans take part in a 4x4 tourism trip through the desert. By Mahmud TURKIA (AFP)

A road trip through Libya's desert would long have sounded like a holiday in hell but, two months into a ceasefire, adventurous travellers are exploring the Sahara by four-wheel drive.

Foreigners are still staying clear of the country after a decade of war -- but some 1,000 Libyans recently set off in a pioneering convoy of 300 all-terrain vehicles through the sandy wilderness.

Hopeful that the October truce will hold, they sought to rediscover the natural beauty of a country that boasts sweeping desert vistas, hidden oasis towns, ancient Greek and Roman ruins, and a Mediterranean coastline.

The 4WD enthusiasts -- almost all men, sporting sunglasses and outdoor gear -- started their journey at Al-Qaryah Al-Gharbiyah, a crossroads town dubbed the "Gateway to the Sahara" 350 kilometres (220 miles) south of Tripoli. 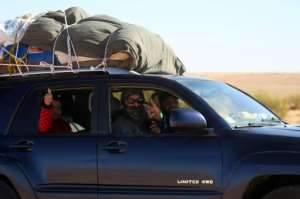 After filling their tanks and checking their gear and supplies, they headed off in a cloud of dust through a sun-baked landscape where the desert is framed by ochre mountains.

Joumaa Omar, a tour guide specialised in Sahara trips, called the journey a "reunion of brothers" and a symbol of peace in a country torn by violence since the 2011 ouster and killing of dictator Moamer Kadhafi.

Omar, 55, on his first desert expedition in many years, said it was an opportunity to "bring everyone together with the message 'yes to peace, not violence'".

They were headed for Tadrart Acacus, a mountain range near the Algerian border famous for its dramatic rock formations and World Heritage-listed prehistoric cave paintings.

'So much to offer' 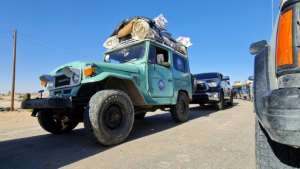 In 2010, 110,000 foreign tourists visited Libya, generating $40 million, a figure that dropped to zero amid the political chaos and insecurity following the fall of the Moamer Kadhafi regime in 2011. By Mahmud TURKIA (AFP)

For years Libya has been torn by brutal conflict between two rival administrations that fought with militias, drones and foreign mercenaries.

A UN-brokered ceasefire in October has raised hopes the oil-rich country that has also become a haven for human traffickers will finally find stability and peace.

Most foreign governments still advise their citizens to avoid travel to Libya for now, but for the group of war-weary Libyan citizens it was time to hit the road.

"We've been working hard for weeks ... to make sure that there won't be any security problems during our passage," said Omar.

Because of the Covid-19 pandemic, participants had to present negative tests and travel separated into "small groups, to respect social distancing", Omar said.

Kadhafi's Libya had, toward the end of his reign, gradually opened to foreign tourism, after decades of being boycotted by the international community.

With the lifting of a UN embargo in 2003, Tripoli began issuing visas, set up a tourism ministry and launched a strategy to attract international visitors.

Libya welcomed 110,000 foreign tourists in 2010, earning $40 million, a figure that effectively dropped to nothing the following year. 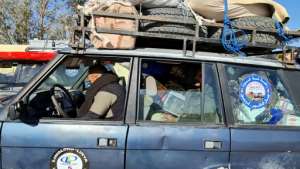 One of the desert drivers said the journey would help create "a beautiful image of the country" . By Mahmud TURKIA (AFP)

One of the desert drivers, Abdallah al-Maghrabi, who joined the group from Ajdabiya in eastern Libya, said the journey would help create "a beautiful image of the country".

"For nearly a decade, the world has heard about nothing but war and chaos in Libya, even though the country has so much to offer," he said.

To make tourism a profitable sector again, he acknowledged, Libyan factions will have to build stability and find a way to "end their differences".

Another participant, Abdel Hamid Mohamad, aged 30 and well-travelled abroad, enthused: "I have discovered that Libya is no less beautiful than other tourist destinations.

"I now understand why so many foreigners wanted to come to Libya before 2011... The country deserves a visit."