A Free World Or An Illusion 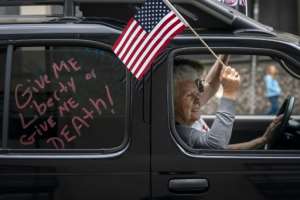 In global public perception, America not only represents a beacon of hope for many people, but it also is perceived to be imbued with the traits of democracy in most contemporarily applicable form. I must admit that it is often cumbersome to practice the ideals one preaches. Easier said than done I guess. Many African nationals see America to be a beacon amidst the tempest of their daily lives. A perfect ambience to kick start life in a realm of uninterrupted freedom.

But is this a phantom or simply a wish of an idealist state that almost everyone in Africa dreams about so desperately, wishes to catch the slightest glimpse of, and have a taste & feel of this great land of opportunity. Many in Africa have become frustrated for life considering having built their high hopes around traveling abroad which in most cases have seldom come to fruition. In the corners of their presupposed minds, they couldn’t make it anywhere in life aside America the great land of opportunity.

The shenanigans most of our brethren abroad portray when they touch down Africa further fuels the desire in many to want to travel there. You find many risking their cherished lives via the Sahara Desert enroute Libya in a titillating anticipation of further making it across the great Atlantic Ocean to Europe and perhaps America. Abound these mini rubber boats are many African nationals whose lives are ended abruptly because these boats can’t stand the tempest of storms and waves so they often capsize and many lives perish tragically.

This ordeal hasn’t deterred many from embarking on this dreadful and deadly journey in the pursuit of “Life, liberty and happiness” as enshrined in the American declaration of independence. Sadly, when they do succeed in traveling there and indeed obtain citizenship, they often find that the so-called pursuit of life, liberty and happiness is simply an illusion in America because of the behavior and radical racial decrimination of some white supremacists and a general systemic discrimination and white supremacy.

Ironic isn’t it! I mean America is supposed to be the land of free isn’t it? Or perhaps it is a liberated land for only the white majority? We’ve read and seen in the news the police brutality our brethren abroad have had to suffer at the slightest provocation or semblance of a supposed purportion of crime. In fact, it is of personal risk to remain at a crime scene as a black man even if you’re not the culprit of the crime, you must flee the scene instantaneously because being black or a person of colour is enough reason to assume you a criminal and culpable for the crime just by dint of your proximity to the crime. This ineaffable behaviorism depicted by the citizens of this so-called free world whose ideals its citizenry so much act against in sharp contrast is very regrettable and quite hypocritical I’ve come to establish. Very contradictive and somewhat laughable to say the least.

America is the state that feed foreign countries whilst some of their citizens starve on their streets. I’ve always nursed the dream of furthering my studies abroad and to state this in exactitude I’d prefer the United States of America because it is the great land of opportunity where top notch education is supposedly given to anyone desirous of it, but having realized that in many ways than one white lives matter more in America than non-white lives and I could be killed by any police officer not because I’d be involved in any crime or criminal act but the mere fact that I’m black makes me a target to be killed like an animal without a fair trial or justice. The apparent injustice suffered by black people makes me think twice about pursuing this dream of mine. I’m in a state of angst and I can only try to imagine how most of my brethren in America survive this stench of stigma and voracious behaviorism of some white people they confront daily. Sometimes the only disqualification about a black person seeking a job in America is that s/he is black even though their academic credentials are stunningly impeccable. If this isn’t frustrating and nauseating then I wonder what else is. Indeed, it’d be unfair to tag all white folk as potential racial radicals. Rather, the uncouth demeanour of many white people has made it compendious to say this in brevity. There’s racial discrimination in America which is an enormous shame in this 21st century where democratic governance allows for the several freedoms of which the declaration of independence enshrined in America’s constitution so much pontificates about.

It’s sad that the colour of a man’s skin is enough evidence to character assassinate him without assessing the content of his heart or examining his deeds. Contrary to the American principle of merit, the mere condition of a person’s blackness counts as a negative in his chances in life. There goes a month without another such wanton killing. Eric Garner, Trayvon Martin, Philando Castile, Michael Brown, Sandra Bland, Freddie Gray, Terrence Crutcher, and recently Botham Jean. I end with Botham Jean because he was an immigrant like many Ghanaians who was killed in his home by a police officer who just for no reason just knocked on his door and shot him dead. Yet the Dallas Police Department let her go and rather issued a warrant to search his apartment for drugs and illegal substances. Without public outcry, the police officer who killed the St. Lucian immigrant would not even have been arrested. This devaluing of black lives has instigated the radical behavior of some white supremacists to perpetuate the killing of blacks in America and doing so gleefully without any innate moral conscience that provokes thought within their hearts. A white man opened fire at a Charleston South Carolina church killing a dozen black worshippers simply for being black. Recently a white man just randomly shot two black people at a Kroger Grocery store while telling a white customer that “whites don’t shoot other whites”.

If America is indeed the land of the free as asserted over and over by the American political and media class, then all lives must matter not only white lives. An example must be made conspicuously of culprits involved in racial discrimination and radicalism especially when those people are public servants like the police. Until all these structural reforms are put in place to curb this menace, America remains the land of illusion not opportunity for what is opportunity to the dead? My name is Rafiq Thompson and these are my thoughts about the so-called free world.

More Feature Article
ModernGhana Links
Who says Ghanaians relished the flavour of peace from 2009 to 2016?
This Is Why You Should Never Ask A White Woman Her Age Or Her Phone Number When You First Meet Her
Reviewing the Free SHS Policy
Why Has Fighting in Ukraine Led to Food Emergencies in Africa?
The Sun: A blessing to all, but to some than others?
Nobody, No Political Party, No Group Of People Have The Right To Mortgage A Nation’s Future And Shared Destinies Beyond An Agreed Stated Number Of Years
The Day Lions From Ahanta Mounted The Podium In Rome To Say Their Own Stories
Bringing Quality To The Services We Pay For
When vision is not served glory is not gained
TOP STORIES