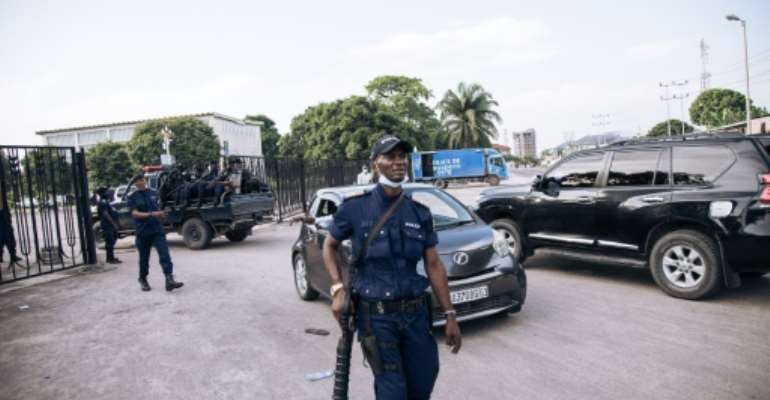 Police were called to the parliament building on Tuesday after clashes erupted between opposing sides. By Alexis HUGUET (AFP/File)

DR Congo legislators on Thursday voted in favour of removing the National Assembly's speaker, in the latest round of a bitter dispute between President Felix Tshisekedi and supporters of his predecessor Joseph Kabila.

After extraordinary scenes in parliament this week, when police were brought in at one point to end brawling, MPs voted in favour of a petition to force out the National Assembly's pro-Kabila speaker, Jeanine Mabunda.

Kabila's supporters in the Common Front of the Congo (FCC) party accuse Tshisekedi of breaching the constitution.

The party say Tshisekedi is plotting to establish a "dictatorial regime, in the service of personal power".

"The positions (between the pro-Tshisekedi and pro-Kabila sides) seem irreconcilable -- it's a tug of war," said a diplomat, who feared "major tension" lay ahead in DRC's political institutions.

Hundreds of police controlled the entrance to the sprawling parliament, known as the Palace of the People, only allowing MPs, accredited journalists and parliamentary workers through. 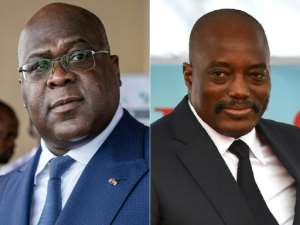 DR Congo has been shaken by a bitter dispute between President Felix Tshisekedi, left, and supporters of his predecessor Joseph Kabila. By Tchandrou Nitanga, TONY KARUMBA (AFP/File)

The petition filed by Tshisekedi loyalists followed an announcement by the president on Sunday that effectively sounded the death knell to his troubled power-sharing agreement with the FCC.

Stymied in his bid to enact reforms after winning elections in December 2018, Tshisekedi declared he would seek to forge another coalition within the FCC, or would otherwise dissolve the assembly.

A total of 484 MPs out of 500 were present at a tense session late Thursday debating whether to oust the assembly's speaker Mabunda, with 281 voting in favour and 200 against.

The speaker asked the assembly to reject the petition against her due to "purely technical and non-political" reasons.

The roots of the crisis date back to the handover of power between Kabila and Tshisekedi in January 2019.

It was the Democratic Republic of Congo's first peaceful political transition since independence from Belgium in 1960.

But Kabila, who is still only 49 after ruling for 18 years, retains huge clout through political allies and appointees in the military.

On Thursday Tshisekedi met with around 50 high-ranking army officials, who "reaffirmed their determination to only carry out his orders", the presidency said on Twitter.

Tshisekedi also met with military leaders last week, the head of the elite Republican Guard ordering his troops "not to plot" against the president. 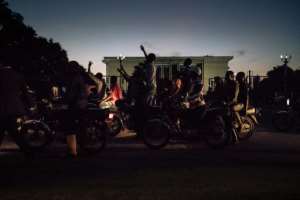 Supporters of Tshisekedi's party in the capital Kinshasa. By ALEXIS HUGUET (AFP/File)

Under a still-unpublished deal between the current and former president, Tshisekedi forged a coalition government with the FCC, which emerged from the December 2018 elections with more than 300 seats in the 500-seat assembly.

The uneasy arrangement cast a shadow over Tshisekedi's pledge to enact institutional reforms and fight corruption.

Things came to a head in July after he appointed three new judges to the DRC's top court, dismissing FCC protests.

In October, he revealed there had been disagreement in the coalition on core issues, including national security, the management of state assets, the independence of the judiciary and the organisation of elections.

The following month, he embarked on three weeks of consultations with various parties and political figures, seeking -- in the words of his office -- "the sacred union of the nation".

These talks culminated in Sunday's announcement of the search for a new government lineup, and the threat to dissolve parliament.

On Monday, pro-Tshisekedi MPs trashed furniture on the National Assembly's podium, and on Tuesday, legislators on both sides brawled in the building's lobby, prompting the police to intervene.

Tshisekedi has been verbally supported by other countries, including the United States, France and Belgium.