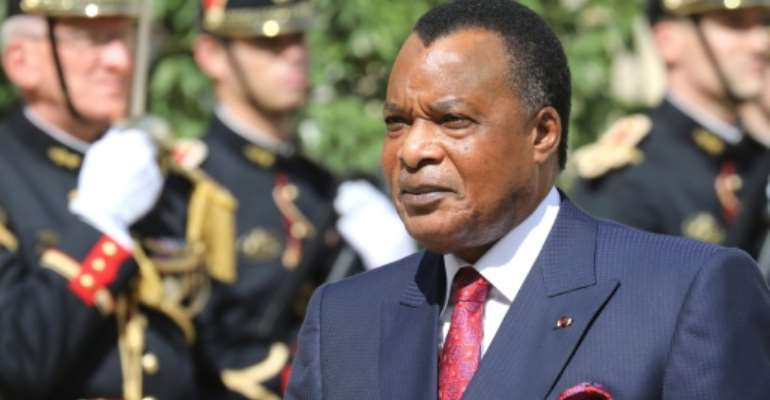 Congo President Denis Sassou Nguesso, pictured during a visit to Paris in 2019, first took office in 1979. By ludovic MARIN (AFP/File)

The president of the Republic of Congo, Denis Sassou Nguesso, who has accumulated 36 years in power, will seek a fourth term in elections due next March, the country's ruling coalition said on Thursday.

"Every party in the presidential majority opted, or will do so shortly, for President Sassou Nguesso's candidacy," said Pierre Moussa, acting chairman of the 17 parties in the coalition.

"The presidential majority believes that of all its leaders, it is President Sassou Nguesso who holds all the trump cards," he told a press conference.

Sassou Nguesso, 77, has cumulatively spent 36 years in power since he first became president in 1979, making him one of the longest-serving leaders in the world.

In 2015, the country staged a referendum on removing a 70-year age limit and a ban on presidents serving more than two terms.

The move paved the way for Sassou Nguesso to secure a third term in elections in March 2016 that were marred by bloodshed.

They were arrested, put on trial and each handed 20 years in jail on charges of undermining state security.

The main party in the governing majority, the Congolese Party of Labour (PCT) headed by Moussa, had already named Sassou Nguesso as its candidate in a congress in Brazzaville, the capital, last December.

Sassou Nguesso may officially announce his candidacy, as well as unveil the precise date for the elections, on December 19, when he is scheduled to make a nationwide speech.

The country is in the grip of a deep economic crisis, triggered by the slump in oil prices but worsened by long-standing debt and the impact of the coronavirus pandemic.