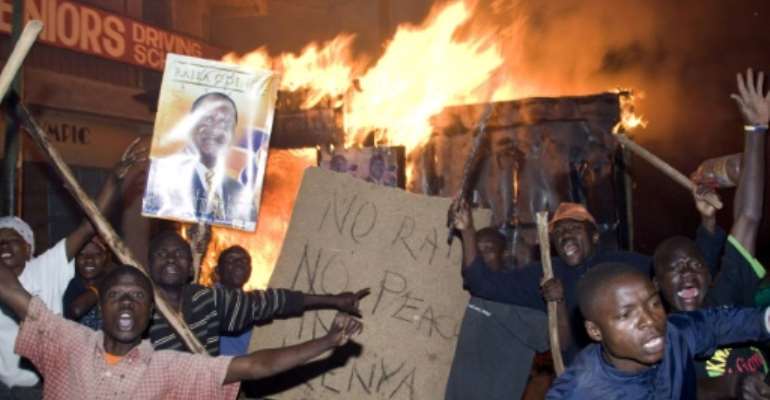 Violence erupted after the 2007 elections. By YASUYOSHI CHIBA (AFP/File)

Kenya's High Court on Thursday ordered the government to pay compensation to four female survivors of a wave of sexual violence that unfurled after violently disputed elections in 2007.

The four will each receive the equivalent of around $36,000, while another four plaintiffs -- two women and two men -- had their cases dismissed.

The government was responsible for a "failure to conduct independent and effective investigations and prosecutions of SGBV (sexual and gender-based violence)-related crimes during the post-election violence," the court said.

The result, it said, was a "violation of their constitutional rights".

Months of violence convulsed Kenya following a disputed presidential election in 2007. Rights groups found that more than 1,100 people were killed and at least 900 people suffered sexual assaults, including gang rape and castration.

Years later, the International Criminal Court in The Hague indicted Kenya's President Uhuru Kenyatta and his deputy William Ruto for crimes against humanity, but both cases collapsed when witnesses failed to testify.

Physicians for Human Rights (PHR), a charity that helped bring Thursday's case to court, welcomed the "landmark" ruling, saying it was the first time in Kenya that post-election sexual violence has been recognised by the government, and compensation offered.

"After more than seven years of litigation ad delays, some justice has finally been served," said Naitore Nyamu, head of PHR's Kenya office.

"This is a historic day for survivors of the rampant sexual violence perpetrated in the aftermath of the 2007 election."

One of the compensated survivors said, "We are happy that the court has finally recognised the harm that we suffered as victims. However, we do not understand why the court separated us and did not offer compensation for the other four victims."

Violence -- including sexual violence -- continues to be a staple of presidential elections in Kenya, where the next vote is due in August 2022.