Nepal and China in rare accord over newly measured Mount Everest 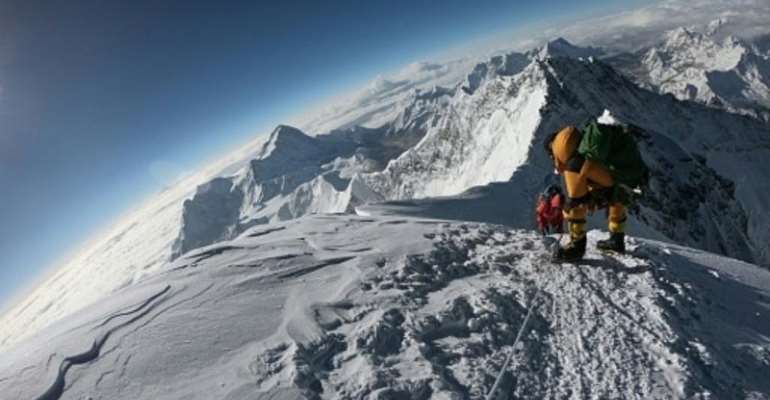 Nepal and China finally buried a running dispute over the height of Mount Everest as they agreed the world's highest mountain that dwarfs their borders is indeed taller than previously imagined, thanks to updated measurements.

“This is a historic day…,” Nepal foreign minister Foreign Minister Pradeep Gyawali announced on a video call with his Chinese counterpart Wang Li.

“The new height of Mount Everest is 8,848.86 metres,” Gyawali said during the call, broadcast by India's WION television station.

Nepal had accepted a 66-year-old Indian geological survey that calculated the height as 8,848 metres or 29,028 feet after taking snow into account.

Long-running dispute
Tuesday's much-awaited announcement brought a sense of closure in Nepal, which had toiled since 2011 to measure Mount Everest, an annual money-spinner for the landlocked nation bordering India.

Mount Everest was an “eternal symbol of ... friendship between Nepal and China,” said minister Gyawali.

“There are many other milestones we want to achieve together …. Our two countries are committed to work together,” he added.

Nepalese state surveyors said the dispute can now be buried forever in the Himalayan snow.

“The margin of error is within centimeters,” Dangol boasted.

“This survey will end debates on the height of Everest once and for all. This will be a commonly accepted height,” the official said.

Some analysts wondered whether world record books should now be re-scripted, taking into account the changed stature of the planet's loftiest peak.

2015 Nepal earthquake
Some mountaineers believe Nepal's deadliest earthquake in 2015 which claimed 9,000 lives in the country  and 18 at the mountain's base may have had altered its height.

But experts in India said this explanation needed to be scientifically established.

“It might have changed,” S. P. Malik, Secretary of Indian Mountaineering Foundation, told RFI in Delhi.

“But it is seismologists and scientists who will be able to comment whether there has been a change after that movement or not,” said Malik, a retired Indian army colonel.

The Foundation has slated an expedition next year to four mountains including Mount Everest and Malik joked climbers must scale three feet extra when they attack the world's tallest peak.

“Definitely yes…if it has really happened,” the Indian climber added.

Mountain tourism
Nepal last month reopened the climbing and trekking season that was closed earlier this year because of the coronavirus pandemic, triggering a crisis.

An estimated 800,000 people are directly or indirectly employed in the tourism industry in Nepal, home to eight of the world's 14 highest mountains, including Mount Everest, the tallest.

Everest has been climbed 10,184 times by 5,789 people from across the world ever since New Zealand's Sir Edward Hillary and Sherpa Tenzing Norgay conquered the foreboding peak in 1953.

At least 311 people have died trying.