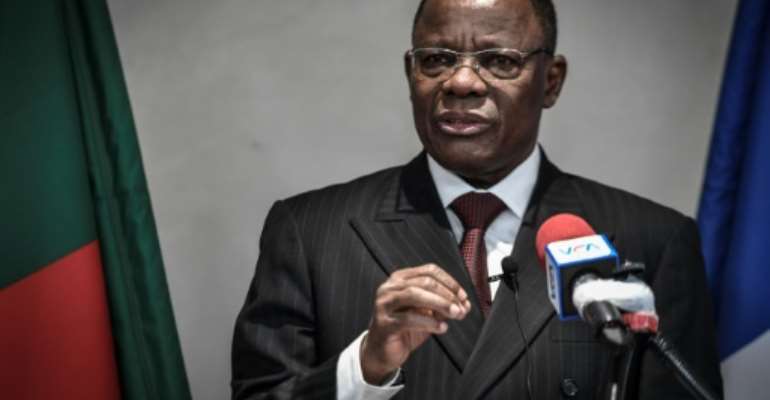 Cameroonian opposition leader Maurice Kamto has been prevented from leaving his house since September. By STEPHANE DE SAKUTIN (AFP)

Cameroon police, who have been surrounding the home of opposition leader Maurice Kamto since September, have lifted the effective house arrest, his party said Tuesday.

Kamto, who lost to President Paul Biya in 2018's election, has been prevented from leaving his home since the eve of a peaceful protest march in the capital Yaounde on September 22 when demonstrators called for Biya to go.

Kamto had been imprisoned in January 2019 following a march protesting the vote. Biya ordered him freed nine months later under international pressure.

But his subsequent house arrest has been strictly enforced by the strong police presence. Kamto has described it as "sequestration".

The government alleged that Kamto and his associates had defied laws and regulations by "violating the ban on public demonstration".

But the security cordon around his house was "lifted entirely this afternoon, said Emmanuel Simh, a vice president of Kamto's Cameroon Renaissance Movement (MRC).

"I think Mr Kamto is now free to move around. He was not notified of the ban on him going out, so he will not wait for a notification that he can now move," said Simh.

Lawyer Hippolyte Meli confirmed the news after going to his client's home.

Hours earlier the government released a statement saying that "the situation of the MRC leader... will continue to be the subject of careful examination" by the courts, without giving further details.

"Legal proceedings against the leaders and organisers of this movement will continue," the government said.

Police arrested numerous MRC supporters and officials at the September march, some of whom remain in detention.

The government accuses Kamto and the MRC of seeking to organise an "insurrectionary movement".