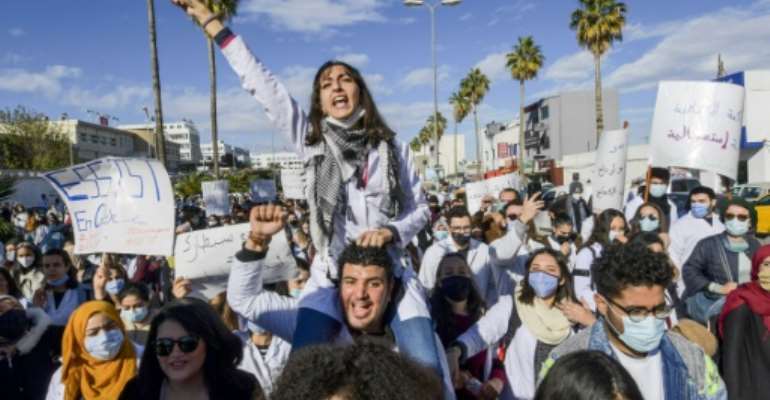 Tunisian doctors demonstrate in the capital Tunis over the country's crumbling public health infrastructure, following the death of a young doctor in a lift accident. By FETHI BELAID (AFP)

Thousands of striking Tunisian medics and hospital staff staged an angry protest on Tuesday over the country's crumbling public health infrastructure, after the death of a young doctor in a lift accident.

Badreddine Aloui, 27, died last week after falling down an elevator shaft when the doors opened with no lift in place -- despite the fault having been reported several years earlier.

His death sparked calls for the health minister to resign and renewed anger over the failings of Tunisia's long-neglected healthcare system, buckling under the strain of the coronavirus pandemic.

The protesters, many of them wearing white coats, gathered outside the health ministry in Tunis and chanted angry slogans against the country's political class.

"Killers of our children! Thieves of our country!" they shouted. "Strike! Strike! No crime unpunished!"

It came as Tunisia prepares to mark 10 years since a revolution that many had hoped would address official corruption and economic woes in the North African country.

"The public health sector is in a catastrophic state," said a doctor who addressed demonstrators after they marched to the prime minister's office.

"It's us who will change it -- don't wait for anything from (the political class), they don't want to do anything."

Tunisia's health sector, which was opened to private investors a decade before dictator Zine El Abidine Ben Ali was toppled in 2011, suffers from chronic mismanagement and corruption.

The situation has been exacerbated by the coronavirus pandemic which has infected over 100,000 people in Tunisia and killed over 3,500.

According to a recent study, 13 of the country's 24 provinces have fewer than one intensive care bed per 100,000 residents.

16 die in crash at Akim Asafo, others in critical condition
19 minutes ago