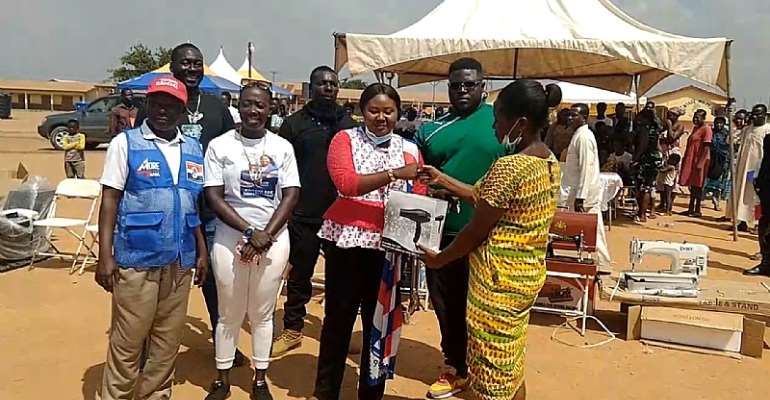 The NPP Member of Parliament(MP) for Kwabre East Constituency, Francisca Oteng Mensah has warned of imminent danger if constituents vote for an independent parliamentary candidate in the upcoming elections.

She said voting for an independent parliamentary candidate will stifle development in the area since it will be difficult for that candidate to lobby for projects that will enhance their living conditions.

The Kwabre East MP explained that developmental projects have spread across all areas within the constituency which relates to education, health, roads, housing and other social amenities.

The MP recently spearheaded the clearing of a mountainous dumpsite at Ahwiaa Overseers, a suburb of the Kwabre East Municipality.

This according to madam Oteng Mensah was part of efforts to improve the lives of constituents and also ensure good living conditions.

She made the remarks at a ceremony to present hairdryers, manual and electric sewing machines, sterilizers to over 450 hairdressers, seamstresses, tailors and barbers at Kenyasi in the constituency.

“The President himself has made it categorically clear that he cannot work with an independent candidate and so if someone is going around telling you to vote for the President and vote for him as the parliamentary candidate, there is no way he can bring development to his area. I will urge you to shun the utterances by the independent candidate and vote massively for President Akufo-Addo who is number one on the ballot and for the parliamentary candidate representing the NPP”, she said.

The MP said the constituents should consider their ballots a spoilt one if they fail to vote for the number one presidential and parliamentary candidates on the ballot paper.

The gesture was part of her pledge to empower youth in the constituency who have undergone some skills training.

She advised the beneficiaries to use the items they received to also improve the lives of others who are interested in learning a skill.

The beneficiaries thanked the MP for the donation and promised to use the items efficiently.