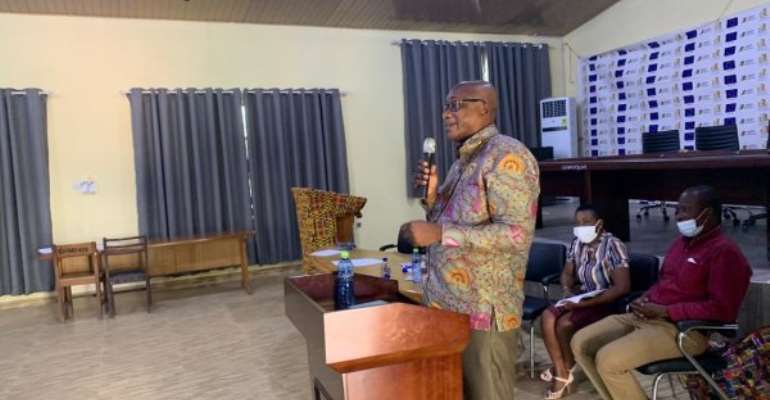 The National Commission for Civic Education (NCCE) is stepping up efforts to create awareness on the need for peace at Old Tafo, one of the electoral hotspots in the Ashanti Region.

“We have increased stakeholder engagement to draw attention to the responsibilities of the citizenry in fostering peace before, during and after the December 7 elections,” Mr. Suraaka Saani, the Municipal NCCE Director, said.

The Municipality had over the years seen tension and violent clashes amongst the youth due to religious and political differences.

This had put it on the watch list of the Regional Security Council as one of the volatile areas that would require strong security presence for smooth and incident-free elections.

Mr Saani, in an interview with the Ghana News Agency (GNA), on the sidelines of a day's workshop at Old Tafo, said the youth “should not risk their lives for self-seeking politicians, but take their destiny into their own hands.”

The programme was sponsored by the European Union (EU) and organized under the auspices of the NCCE with the aim to bring together identifiable youth groups in the Municipality and sensitize them to commit to peaceful co-existence.

The NCCE Municipal Director observed that creating an informed society was prerequisite for successful Presidential and Parliamentary polls.

“How we tolerate and react to provocations, misunderstandings and defeat would go a long way in deciding the success of the elections,” he noted.

Mr Saani cautioned political activists to strive to address all electoral disputes using the right channel, and not take the law into their own hands.

Contributing to the Programme, a Commission Member of the NCCE, Hajia Hajara Mohammed Rufai, advised stakeholders assigned key duties of ensuring the success of the polls to be committed to duty.

Mr Arthur Wilson, the Regional NCCE Director, took the participants through topics, including; the Political Parties' Code of Conduct and Vigilantism and Related Offences Act (Act 999, 2019).

The Act, he said, prohibited vigilantism in political party activities, therefore, it was expected of the youth to stay off violent acts for sanity to prevail in this year's elections.

The workshop brought on board youth representatives of all the political parties, religious organizations and trade associations, as well as traditional authorities, persons living with disability and other identifiable youth groups at Old Tafo.

In line with the programme, the NCCE in collaboration with the Electoral Commission (EC) took the participants through the right voting processes in order to minimize the incidence of spoilt ballots during the polls.

A video documentary on violent political clashes and related consequences in some African countries borne out of electoral disputes was shown to the participants.