NCCE must intensify its education on civic rights and responsibilities 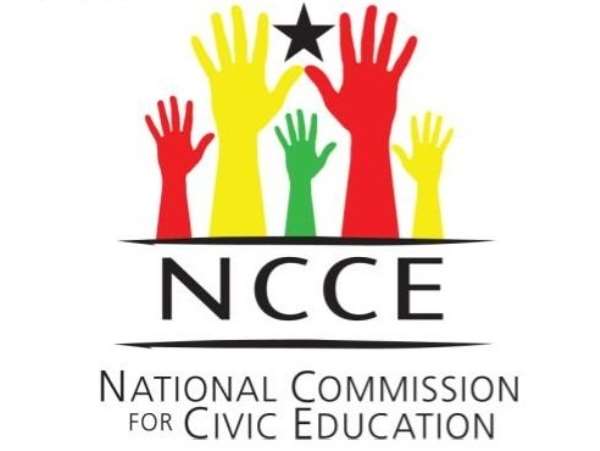 It is a constitutional dictate that every citizen of this country who is eighteen and of sound mind is obliged to exercise his or her franchise by determining who becomes the next leaders who will champion the destiny of this country but it baffles me that citizens renege upon this dictate to exercise this singular right.

I say this because a plethora of calls and messages have visited me every in the past two weeks suggesting that I either see my parliamentary candidate to help them get transported back home or forfeit their votes. And I have often responded in the affirmative, "ok I hear".

The critical question to ask is, "why should eligible citizens think this way"? They think as though all they do is in the interest of the parliamentary or presidential candidate. This I find very worrying and troubling, to say the least! Citizens have forgotten or are ignorant of the fact that their destinies depend to a large extent on the leadership that they chose, and that when bad leaders are chosen, the people are bound to suffer. Neebe told very emphatically that it is not and never the responsibility of th aspirant to buss eligible voters home. It beholds on every citizen to take all necessary steps to be able to exercise their right to vote.

As I wonder why citizens could think this way, I think it is instructive to question the role of NCCE in the discharge of its duties. This is because a well-informed citizen will not renege on his or her responsibility. What education has NCCE provided to the citizens of this country called Ghana such that the burden of coming home to vote does not become the ultimate responsibility of the parliamentary aspirants, especially?

For a citizen to opine that he or she will not come home and vote suggests that he or she doesn't foresee himself or herself as a stakeholder in the outcome of the whole exercise of voting. Illiteracy, it is often said is a disease! And for a citizen to refuse to vote simply because an aspirant could not afford to bring you home is quite berating and less dignifying to us as citizens.

Need be reminded that the quality of leadership that we choose depends upon the quality of education NCCE provides to the citizens of this country with regards to their rights of franchise. The caliber of leadership we have in this country today is all because of a failed NCCE! It is quite apparent that voter apathy in the 2016 elections was very low. Generally, a good number of people did not turn out to vote.

The case of the Volta region is a proper representation. And this was probably because they thought they were doing good to themselves. It is this attitude that has brought us this abysmal Nana Akufo-Addo-NPP led administration which has brought untold hardships to Ghanaians.

I wish to call on NCCE to revise it's notes on voter education and the consequences of not exercising one's franchise or right to vote. In as much as NCCE is mandated to provide the needed education on Civic Rights, let me add that it is equally the role of every citizen to take every necessary responsibility to fulfill his or her right to vote. It is when we take collective responsibility as institutions and citizens that we can make Ghana a better place for ourselves and for posterity.