Cut the comedy: If Akufo-Addo isn’t morally upright, who is? 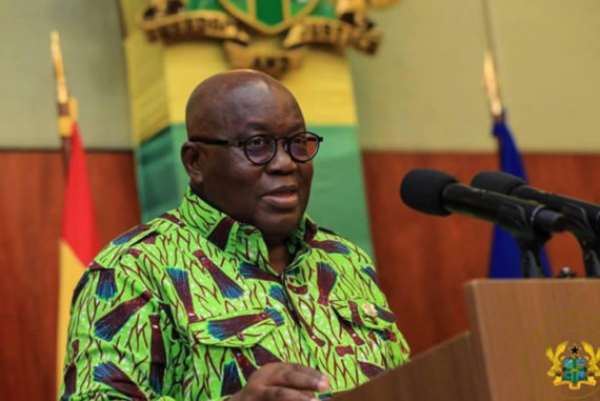 I am struggling to get my head around how and why anyone claiming to be an anti-corruption crusader could accuse someone who has altruistically conceived and delivered the Office of the Special Prosecutor with the view to combating the existential menace of bribery and corruption of being corrupt to high heaven.

Despite the widely held notion that Ghanaian politics is full of extremely corrupt public officials, we have many selfless, morally upright and forward-thinking politicians like His Excellency President Akufo-Addo in our midst.

Truly, despite the unrepentant critics unsubstantiated claims of corruption, some of us are yet to sight, read, or hear a single tangible act of corruption that has ever levelled against President Akufo-Addo.

To some of us, the biggest alleged bribery and corruption scandal ever happened in the history of Ghanaian politics, remains the cloudy Brazilian Aircraft deal negotiated by the then vice president under Mills administration, John Dramani Mahama.

Indeed, there are more alleged bribery and corruption scandals hanging on the neck of Ex-President Mahama than any other president in the history of Ghanaian politics.

The alleged bribery and corruption allegations hanging on the neck of former President Mahama include the furtive gift of a brand new Ford Expedition vehicle worth over $100,000 from the Burkinabe Contractor, Djibril Kanazoe, the Brazilian Aircrafts, the Airbus, the STX housing deal, the Armajaro saga, amongst others.

Take, for instance, a few years ago, we read that four courageous Ghanaians had petitioned the then Special Prosecutor, Martin Amidu to probe into the alleged E.O. Group’s $13 million corporate social responsibility fund towards the development of the Western Region which the petitioners claimed to have been diverted by Ex-President Mahama (See: ‘Mahama diverted $13m E.O. Group money; probe him – Four citizens petition Amidu’-todaygh.com/ghanaweb.com, 18/06/2018).

To be quite honest, we cannot fault the patriotic Ghanaians for dreading the return of a former President who can boldly accept a furtive gift of a brand new Ford Expedition vehicle worth over $100,000 from a Burkinabe Contractor called Djibril Kanazoe.

According to the investigative journalist, Manasseh, the Burkinabe Contractor, Djibril Kanazoe, had over the years been bidding for contracts in the country. However, he was not successful until a middleman led him to meet then Vice President Mahama.

Subsequent to meeting the then Vice President Mahama, Kanazoe was handpicked to build the $650,000 Ghana Embassy fence wall in Burkina Faso.

The account is given, that In September 2014, when officials of the Bank of Ghana met the Public Accounts Committee of Ghana Parliament (PAC), it came to light that an amount of $656, 246.48 had been spent on the construction of a fence wall over a parcel of land belonging to the Ghana Embassy in Burkina Faso.

Apparently, PAC requested the Bank of Ghana to look into what it referred to as: “the outrageous” cost of the project.

However, it came to light that the procurement process was breached to the advantage of President Mahama’s Burkinabe friend.

Amazingly, during an interview with Manasseh, Djibril Kanazoe admitted that he did not put in a bid for the contract, however, the Ghana Embassy in Ouagadougou wrote to his company to request price quotations for the project. He, however, forwarded the necessary quotes and was selected.

Besides, Mahama’s dreadful handling of the STX Housing deal which was supposed to provide affordable housing units to the security agencies leaves much to be desired.

It was reported, somewhat vividly, that although the deal did not materialise, the then Vice President Mahama allegedly gave us a bill of an excess of $300 million.

After the failed deal with STX to build housing units for the nation's security agencies, the NDC government entered into another deal with the GUMA Group, for the construction of 500 housing units.

The deal which was spearheaded by the then Vice President Mahama was widely criticised by various stakeholders, just as the STX deal, following the decision to side-line local construction firms in favour of the foreign company. The unusually high cost of the project was also a source of concern to many.

In fact, little did some doubtful Ghanaians believe former Attorney General, Mr Martin Amidu, when he told Ghanaians that our late President, Mills, set up a committee to Investigate then Vice President John Mahama regarding the Processes of the Acquisition of Five Aircrafts (5) including Embraer 190 Aircraft and hanger for the Ghana Armed Forces.

But if we are to mull over Mr Amidu’s exposition, we can infer that the late Mills lost trust in his then vice president Mahama because of the dubious handling of the deal.

Truly, if the late Mills set up a committee to investigate his vice Mahama, then he had a gleam of suspicion on his mind . In other words, he felt Mahama was trying to rip off the nation, hence setting up a committee to unravel the furtive deal.

Upon a carefully considered deliberation, reflective thinkers may conclude that the late Mills was not happy with the deal.

If that was not the case, why would he set up a committee to investigate Mahama, the architect of the whole deal?

The story is told that the Airbus deliberately paid huge bribes to a few countries including Ghana in order to secure contracts during Mills/Mahama administration between 2009 and 2015.

Following an investigation into the apparent damning scandal, the Office of the Special Prosecutor finally concluded that the said Government Official 1 in the Airbus bribery scandal happens to be the former president and the 2020 flagbearer of NDC, John Dramani Mahama.

The report, however, concluded that since we are in the election period and the said protagonist is a presidential candidate, the Office of the Special Prosecutor is not in a position to take any immediate action.

I have always insisted that Westerners are not less corrupt than their African counterparts. However, what makes the people elsewhere much more responsible than a Ghanaian and Africans as a whole is the rigidity of the state institutions and the effective laws and regulations.

It must, however, be emphasised that in as much as the followers have a duty of obligation, it is up to the leadership to bring sanity into the system by strictly ensuring that all laws and regulations are enforced without fear or favour.

You may believe it or not, corruption is a serious economic, social, political and moral impediment to nation building, and therefore it is expected that corrupt officials will be held accountable at all times without fear or favour.

Corruption, as a matter of fact and observation, is found in all countries—big and small, rich and poor—but it is in the developing world such as Ghana that its effects are most destructive.

Unfortunately, however, it would appear that in Ghana, the justice system more often than not, descends heavily on the goat, cassava and plantain thieves, and let go the remorseless criminals who hide behind the narrow political colorations.

That being said, the benign and somewhat lenient approach towards the fight against the canker of corruption would not curb the widespread sleazes and corruption which have been retrogressing Ghana’s advancement thus far.

How on earth would individuals turn away from their crimes if the only available punishment for stealing the public funds is a mere plea to return the loot?

If we are ever prepared to beseech the fantastically corrupt public officials to only return their loots without any further punishment, we might as well treat the goat, plantain and cassava thieves same. For after all, what is good for the goose is good for the gander.

Some of us, as a matter of principle, cannot comprehend how and why the people we choose to entrust with the national coffers could team up with shifty individuals and steal gargantuan sums of money belonging to the nation without facing any stiff punishment.

“When foreign aid is diverted into private bank accounts, major infrastructure projects come to a halt. Corruption enables fake or substandard medicines to be dumped on the market, and hazardous waste to be dumped in landfill sites and in oceans. The vulnerable suffer first and worst (Ban Ki-moon, 2009)."

Corruption, to be quite honest, impedes economic development by distorting markets and collapsing private sector integrity.

“Corruption also strikes at the heart of democracy by corroding rule of law, democratic institutions and public trust in leaders. For the poor, women and minorities, corruption means even less access to jobs, justice or any fair and equal opportunity” (UNDP 2016).

In practice, corruption is a global phenomenon which requires a collaborative effort to prevent and eradicate.

However, in Ghana, in spite of the fact that corruption is a serious economic, social, political and moral impediment to the nation building, our corrupt officials are bent on siphoning our scarce resources without a second thought.

There is no gainsaying the fact that Ghana’s transgressed and incompliant politicians and other public officials often get away with murder.

For, if the bribery and corruption; dubious judgment debt payments; stashing of national funds by some greedy opportunists and misappropriation of resources and crude embezzlement by some politicians do not warrant criminal charges, then where are we heading as a nation?

The all-important question discerning Ghanaians should be asking is: will the day come when “Ghana’s political criminals” find they have nowhere to hide?

How serious are we as a nation when we can only descend heavily on the goat, cassava and plantain thieves, and let go hardened criminals who persistently dip their hands into the national coffers as if there is no tomorrow?

In ending, it is true that Akufo-Addo is a descendant of Biblical Adam with innate human foibles, but corruption, so to speak, is not one of his weaknesses.