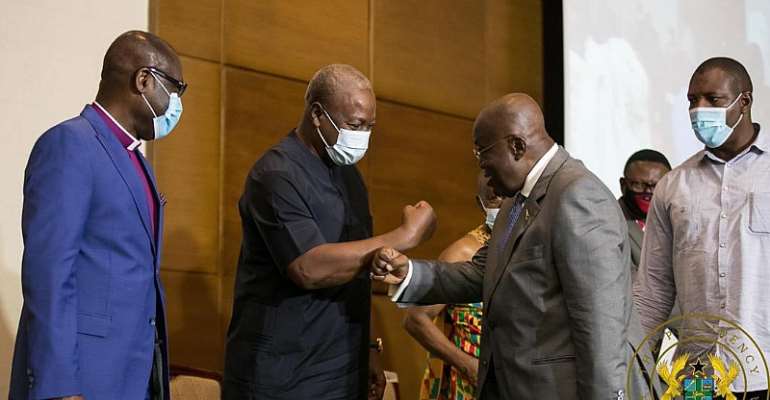 On Monday, December 7 Ghana will go to the polls to elect a new President and new set of Members of Parliament.

The election would be the eighth since the country returned to constitutional rule in 1992 setting the stage for the Fourth Republic.

The election will be a keen contest between the governing New Patriotic Party and the main opposition National Democratic Congress. Indeed, it has been so in the Fourth Republic.

It will also be the first time in the nation’s history where a former president [John Dramani Mahama] will be contesting the person who unseated him [Nana Addo Dankwa Akufo-Addo]. These two have faced off in two other elections; 2012 and 2016 with each having one success and a defeat with each other at the polls.

These political parties [NDC, NPP] are the only parties that have governed the nation in the Fourth Republic.

The two parties have their strongholds which in the Ghanaian political lexicon have become known as “world banks”. In the so-called world banks, no matter what happens, the vast majority of the total votes cast will go to the party whose stronghold it is.

Whereas the Volta Region is for the NDC, the Ashanti Region votes for the NPP.

The view that swing regions in Ghana's electoral demarcation determine the outcome of elections appears to have gained roots in the minds of people, however, a critical look at the figures historically suggests something else.

The election, they say is a game of numbers and so attention must be paid to the regions with high numbers. Prior to the creation of the six new regions in 2018, Ghana had four so-called swing regions.

They are called swing regions because they could vacillate between the NDC and NPP. The two parties have no firm grip on them. They change at will. The regions are/were, Greater Accra, Western, Central and Brong Ahafo. The picture appears a bit clearer now with the creation of the new regions.

Often the votes in these four regions are split in the middle with one having a slight edge over the other. The votes difference usually is in the region of 120,000 more or less.

Though, they swing, it is my view that their influence in terms of the national outlook has been exaggerated. Indeed, in 2008, the NPP lost all the swing regions but nearly won the elections with just Ashanti and Eastern. Even in that election, Ashanti was said to have suffered from voter apathy.

It is my thesis that a more realistic approach to predicting the outcome of the elections should be in favour of the regions which have the highest number of registered voters and a determination of how historically they have voted and how if the voting trend continues, same will impact the national figures.

The 2020 voter registration figures as put out by the Electoral Commission (EC) place Greater Accra, Ashanti and Eastern in that order and these three combined will account for about half of the total registered voters in the country. But Greater Accra with 3,529,187 registered voters, is a swing region and votes there most likely will be split.

It is always not a clean sweep. And since we do not run the Electoral College system of the United States, winning swing regions is not such a big influencer. This leaves Ashanti and Eastern with 3,020,144 votes and 1,641,216 votes respectively. These two are very blue NPP regions. It will take a number of other stronghold regions combined to offset this number.

A look into the Ashanti Region and its influence in elections

The Ashanti Region is the region with the second-largest voter population in Ghana. It is known to be the “World Bank” of the governing New Patriotic Party (NPP).

Since the inception of the Fourth Republic, the Region has constantly voted NPP and with very wide margins.

The Region as shown above has an electoral roll of over three million per the figures of the newly compiled voters’ register released by the Electoral Commission.

For instance, in the 1992 elections, the NPP represented by Prof Albert Adu Boahen got 60.5 percent of the votes in the Ashanti Region with the NDC represented by J.J. Rawlings getting 32.9 percent.

In the 2016 elections, the NPP represented by Nana Addo Dankwa Akufo-Addo polled 1,647,274 representing 76.27% percent of the total votes cast in the Ashanti Region with the NDC represented by John Dramani Mahama polling 497,235 representing 23.02%.

Prior to the 2016 elections, the then ruling NDC government had built a couple of social infrastructure in the Region. These included the;

With these projects in mind, the NDC went into the election with an agenda dubbed “Operation One Million Votes”. Meaning the party targeted to poll one million of the total votes cast in the Region.

However, despite all these investments the NDC government made to back its agenda, it polled less than 500,000 votes.

Now the NPP is in power and the party has also made some investments in the Region. These projects include:

The governing party (NPP) also with these investments in the Region, has targeted to win all the 47 parliamentary seats in the Ashanti Region.

Currently, out of the 47 constituencies, the NDC has Members of Parliament for three of them. These constituencies are the Asawase, Ejura-Sekyeredumase, and the Sekyere Afram Plains. But the NPP has targeted to win them.

Considering the history provided since the 1992 elections, all the time the NDC won the presidential elections, the party polled above 25 percent of the total votes in the Ashanti Region.

The governing NPP has won the presidential elections in the country, anytime it polled more than 75 percent of the total votes cast in the Ashanti Region.

It is my belief that should the main opposition party be able to poll over 25% of the total votes cast in the Ashanti Region, the NDC will be more likely to win the presidential polls.

However, should the ruling party, the NPP also do well to poll over 75% of the total votes in the region, it will retain the presidency.

The writer, Ernest Arhinful, is a journalist with Citi FM/TV