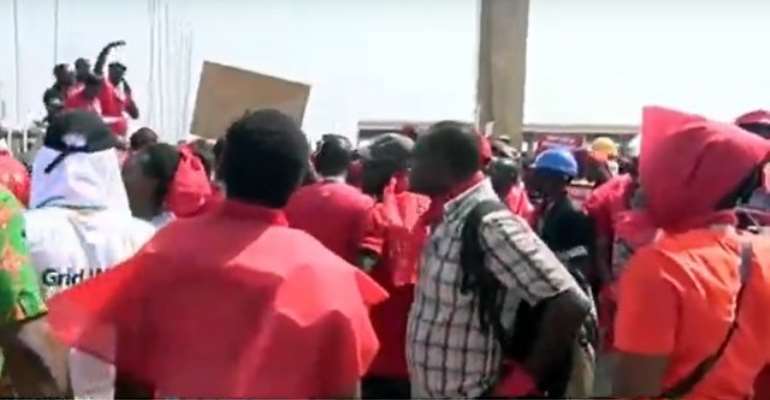 Angry staff of Ghana Grid Company Limited (GRIDCO) locked up management members of the company to press home their concerns for redress.

They were locked up from day time till 7:00 pm on Thursday by the aggrieved staff.

“The angry staff surrounded the head office yesterday and locked the entrance of the head office to demand resonance from our management. We kept them until 7pm which they pleaded for release to consult the board members and the CEO and get back on a meeting today but as at now all the Directors with the CEO are absent from work today but staff group are waiting until 2pm at the head office to take another decision,” a staff told Starr News.

Staff of Ghana Grid Company Limited (GRIDCO) embarked on a sit-down strike ahead of the Presidential and Parliamentary elections on December 7 over wage issues.

The aggrieved workers say they will not attend to all emergencies including falling conductor, transformer failure and system control.

According to the workers Union of GRIDCo, management and the board have failed to furnish it with information on the 2020 wage opener negotiations.

Staff of GRIDCO have as a result hoisted red banners at their various substation installations as a way to express their displeasure and forewarn management of the impending strike.

Some of the aggrieved workers contend that a new Director of Finance upon assumption of office has cancelled some allowances they were enjoying and slashed others over financial difficulties.

Again, transportation allowance instituted for workers following withdrawal of shuttle bus for workers have not been paid.

GRIDCo staff went on strike on December 2019 to push government and other institutions to pay their debt of about 1.2 billion cedis to the power transmission company to enable it run efficiently.