A run-off? The historical numbers of the smaller parties 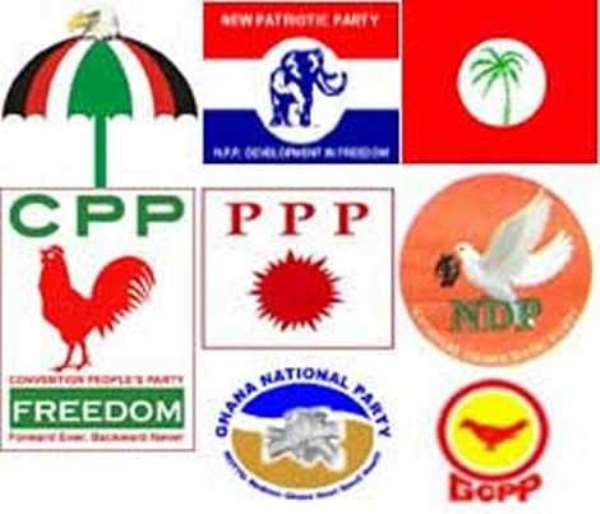 Now to 2000, this year was the first time the country experienced round-off in the election because no political party crossed the 50% + 1 vote to be declared as the elected president. In this year seven (7) presidential candidates represented seven political parties. John Agyekum Kuffour for the NPP, John Atta-Mills for the NDC, Edward Nasigrie Mahama for PNC, George Panyin Hagan for CPP, Goosie Tanoh for NRP, Dan Lartey for GCPP and finally Dr. Wereko Brobey for UGM.

In 2004, only four (4) presidential candidates represented four political parties. These are; John Agyekum Kuffour for NPP, John Atta-Mills for NDC, Edward Nasigrie Mahama for PNC and George Agudey for CPP.

Summing everything up, total votes for 2008 elections were 8,550,547. The so-called smaller parties recorded total votes of 261,186 which represented 3.05%. In this year, the total votes that were casted reduced by 17 votes compared to last year.

Moving on to 2016, six (6) presidential candidates represented six political parties in addition to one (1) independent candidate. These were the presidential candidates with their political parties; Nana Akufo-Addo for the NPP, John Dramani Mahama for the NDC, Paa Kwesi Nduom for PPP, Ivor Kobina Greenstreet for CPP, Edward Nasigrie Mahama for PNC, Nana Konadu Agyemang-Rawlings for NDP and finally, Jacob Osei Yeboah as independent candidate. 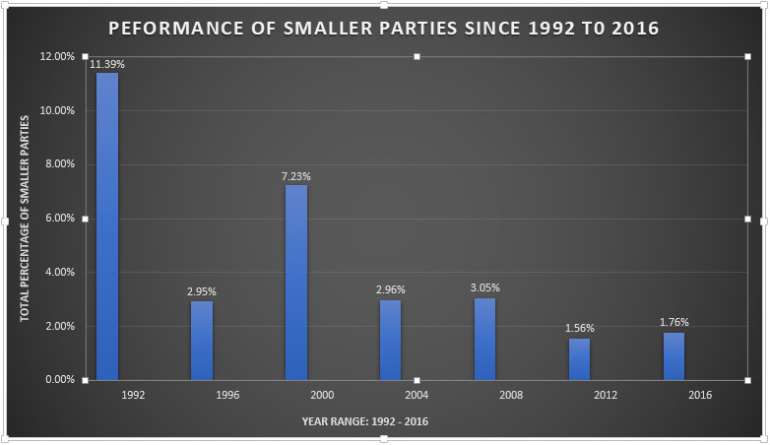 In conclusion, Ghana has enjoyed seven (7) uninterrupted general elections since 1996 and the so-called smaller political parties have been actively involved. There have also been two run-offs in these elections, 2000 and 2008. Run-off basically comes about when a candidate in the presidential race fails to secure the constitutional requirement of 50%+1.

The smaller parties in 1992 pulled closely 12% but didn’t push the elections into run-off because, the main opposition party NPP pulled just 29.91%, that wasn’t enough to push the elections into a run-off. Also, the colossal figure of President Rawlings was significant in the gains the NDC made. The PNDC transitioning into the democratic era with NDC had ruled the nation for 11 years and made built a vibrant network of people and structures coupled with a significant financial and logistical warchest.

In 2020, if the smaller parties are able to amass enough votes that cumulatively gets to 3%, the elections will be pushed into a second round. In this year’s election, aside the two main political parties, NPP and NDC, there are ten (10) so-called smaller parties including independent candidates. This is the only year with a higher number of smaller political parties put together since 1992 and so if these so-called smaller parties are able to amass a total percentage of above 3.0% then it is most likely Ghana will experience the third run-off in elections.

Rawlings came through for me in my difficult moments as Pres...
58 minutes ago