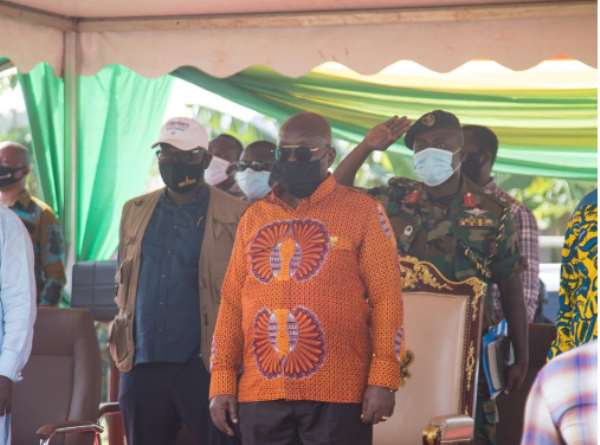 President Akufo-Addo has cautioned contractors engaged to rehabilitate roads in the country to focus on the job at hand.

“Any contractor who demonstrates laxity in the performance of his duties would be shown the exit,” the President said, stressing that the Ministry of Roads and Highways ought to ensure strict supervision of all road contracts.

President Nana Akufo-Addo, addressing a durbar of the chiefs and people of Manso-Adubia in the Amansie South District of the Ashanti Region, said there must be value for money in the execution of road projects in the country.

The President, who was in the Region on a three-day working visit, was not happy at the deplorable nature of the road network in the district.

Consequently, he said, his second term of office would work harder to improve on the situation if the ruling New Patriotic Party (NPP) is given the mandate in the December 7 elections.

Despite its huge gold deposit and economic potentials, the road network in the area is nothing to write home about, making it difficult to facilitate socio-economic activities.

Under the 1D1F Programme, the government had in the past three years completed 76 factories, while more than 230 were at various stages of completion.

On the 'Free Senior High School (SHS)' Programme, the President justified the government's resolve to have initiated it, saying the underlying objective was to develop an appreciable level of Ghana's human resource base.