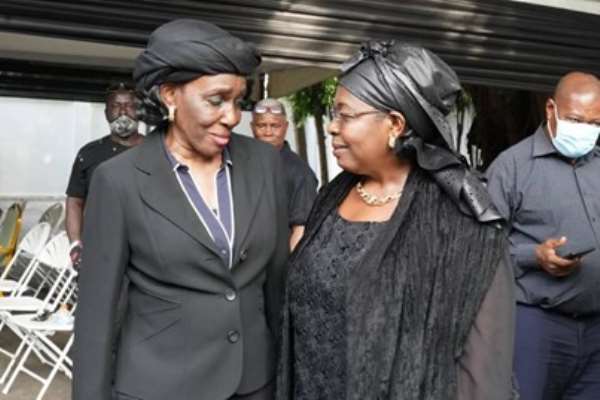 The Presidential Candidate for the National Democratic Party (NDP), Nana Konadu Agyeman Rawlings, in less than 7 days, will continue to mourn her husband, the first President of the 4th Republic of Ghana, His Excellency Flt. Lt. Jerry John Rawlings and have to make tough political decisions ahead of the December polls.

This follows the shocking demise of her beloved husband and the father of Ghana's fourth Republican Democracy on the 12th of November, 2020, 10: 10 a. m at the Korle-Bu Teaching Hospital in Accra.

The distressed widow is immersed in a state of mourning and most, unfortunately, also have to make the tough decisions regarding politics. This calls for urgent and smart decisions capable of winning the love of the public politically and as a wife to the late president.

Sadly, and politically, her opponents are taking advantage of the situation to purposefully chain out claims to trigger public discussion on whether the presidential candidate would pull out of the race or not. This puts more pressure on the Presidential candidate and her party to, as a matter of urgency, effectively communicate, to win the public to their side. It is important to note that, all this is in less than 7 days to the December 7 polls.

A broadcast report captioned “Nana Konadu Still In The Race - NDP,” dated 23rd November, 2020 on CiTi TV 8:00 p.m news brief, had the general secretary of the NDP, Alhaji Mohammed Frimpong rewriting claims that suggest their flag bearer, Nana Konadu Agyeman Rawlings has withdrawn from the race following the death of her husband.

He stated categorically that Nana Konadu Agyeman Rawlings is still in the race. He tried to paint a positive picture of the party and the presidential candidate but I must say, it’s not a mile walk away.

The Gravity of the claims

The claims connote two meanings, either ways, it’s bad for the presidential candidate. The claim first, is to trigger people’s thoughts on the question “what is the former first lady's take on the race considering the sudden demise of her husband? Would she opt-out or continue with the race?” The claims also unpleasantly suggest to the Presidential candidate to step down as a show of respect to her late husband.

What would the brave, first president of the 4th Republic, His Excellency Flt. Lt. Jerry John Rawlings has his wife, the Presidential Candidate of the National Democratic Party (NDP) Nana Konadu Agyeman Rawling, do?

Drawing lessons from the decision of the late president Flt. Lt. Jerry John Rawlings on the call by the current president, H . E Nana Akufo – Addo to name the University for Development Studies (UDS) after him, it is obvious he would want the wife, who is the presidential candidate to help those who need her most, the living and vulnerable than to stay at home mourning him.

The late President who used his prize money from the World Food Prize of $50,000 as seed money to aid in the establishment of the UDS, yet declined an offer a lot of people would pay millions to acquire is of no doubt a clear indication that he would want the wife to go out there and continue his selfless quest to develop people especially the next generation.

Support a strong mother in her trying times!

More Strength to the Agyeman Rawlings Family, God is with you!