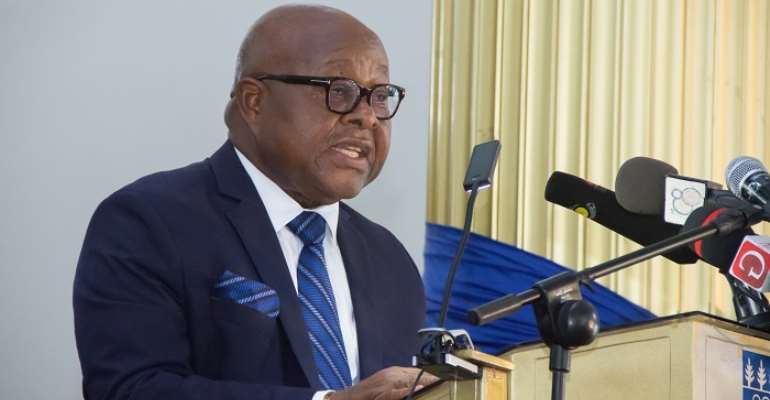 DCCI is an initiative by the Conference of Speakers and Heads of African Parliament (COSAP) to advocate Africa's debt to be forgiven due to the huge impact of the Covid-19 pandemic on Africa's economy.

In the wake of the pandemic, the World Bank forecasts that Sub-Saharan Africa would collectively fall into recession for the first time in 25 years.

The World Bank statistically projected that between 26 and 39 million people in the region were at a high risk of falling into extreme poverty.

The Jubilee Debt Campaign report also indicated that twenty African countries now faced increased difficulties with 50 per cent of African countries spending more on debt repayments than they did on healthcare and education, which were key for human capital development.

African countries are said to be on the brink of a debt crisis as they tackle the effects of the most devastating economic and social disasters in history.

Prof. Oquaye, speaking on behalf of Conference of Speakers and Heads of African Parliament (COSAP), at the meeting with the Diplomats and Development partners, urged them to consider cancelling debts for developing countries in Africa.

He noted that there was an urgent need for the forgiveness of debt since African countries were facing enormous challenges including, increase in health expenses and other allied expenses, shortfalls in petroleum, slowdown of foreign direct investments, reduction in trade volumes, decline in international price of crude oil, exchange rate volatility and debt service difficulties.

Prof. Oquaye said that in the light of global advocacy efforts, the establishment of a more cohesive pan-African parliamentary voice to support the global and regional campaigns for Africa's debt cancellation had become imperative; hence, the African Speakers' Debt Cancellation Initiative was birthed as a means to establish that cohesive pan-African parliamentary voice of the continent to support the global campaigns advocating for Africa's debt cancellation.

Mr Tsutomu Himeno, the Japanese Ambassador to Ghana, and Chairman of Heads of Mission of Development Partners, speaking on behalf of his colleagues, said developed nations were opened to discussing debt cancellation for Africa, taking the total sum of the COVID 19 pandemic on all countries in the world.

One of the key issues that also came to the fore was the lending architecture of the world, which has changed drastically.

Mrs Stephanie Sullivan, the American Ambassador to Ghana, cited interventions offered by the Highly Indebted Poor Countries (HIPC) programme and how they cured the ills of debt burden in African countries.

She urged African countries to refer to the lessons learnt from the interventions to avoid future occurrences.

Responding to the concerns about the HIPC programme, Speaker Oquaye indicated that the support from the Programme of Action to Mitigate Social Costs Adjustments (PAMSCAD) was not enough to sustain African countries and to elevate them from dependents to real partners in the development relations.

He, therefore, urged Development Partners to embrace legislative diplomacy as a tool in engaging the continent on debt forgiveness.