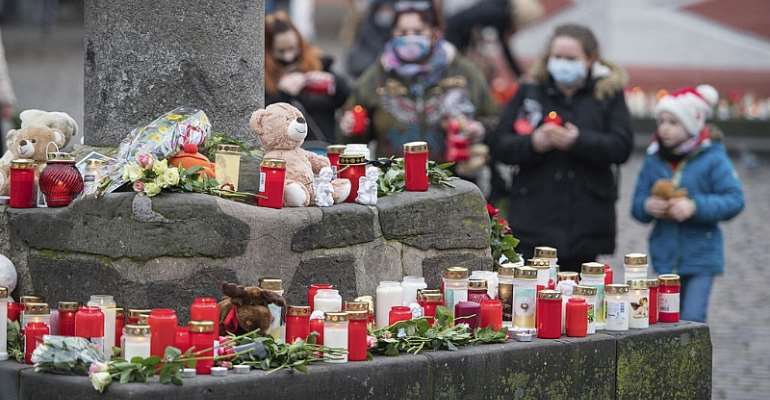 The southwestern German city of Trier has held a vigil in tribute to the five local people who lost their lives after being run over by a motorist on Tuesday. At least 15 people were injured in the incident which took place in a pedestrian area.

Police say they are not treating it as a religious or political attack, but the act of a man who had mental health problems

Hundreds of local residents of all ages turned out on Wednesday morning to put flowers and candles and messages at the centre of the cobbled square of Porta Nigra, a picturesque plaza which usually hosts Trier's annual Christmas market, cancelled this year due to Covid-19.

The mayor Wolfram Leibe told a press conference on Tuesday evening that among the victims were women aged 73, 52 and 25, a 45 year-old man and a 9-week-old baby.

Fire services at the scene reported that four people were critically injured, five severely injured, six with minor injuries, and two dozen were treated for shock.

“This is the darkest day Trier has experienced since World War II,” the Mayor said.

The 51-year-old German suspect, now identified as Bernd Walter W from Kordel, was arrested close to the scene.

Police said he had ploughed through the streets for between 600 metres and a kilometre, leaving behind a trail of destruction.

Witnesses had earlier described seeing people being flung into the air as the car struck them.

Alcohol and mental health issues
Senior public prosecutor Peter Fritzen state said the driver did not have a criminal history and that the motive behind the attack remained unclear at this stage.

Fritzen confirmed that no terrorist connections could be identified and that the deed was probably related to psychological issues.

He further noted that the driver was under the influence of alcohol at the time of the attack.

Condolences
Malu Dreyer, premier of the Rhineland-Palatinate, expressed shock that a baby was among those killed by the driver's "insane act" and shared her condolences with all the affected families.

"We remember the dead and the injured. I wish them that they will get well again. I pray for the people who are fighting for their lives. Many are traumatized. We all hardly know what to do with our feelings," she wrote on social media.

The baby's mother was being treated in hospital for injuries sustained in the rampage.

“The news coming from Trier make me very sad. My condolences go to the families of the victims, who had their lives taken from them so suddenly and violently,” German Chancellor Angela Merkel wrote on social media.

Luxembourg's PM Xavier Bettel also offered his thoughts and sympathies with those affected.

"I am deeply appalled and dismayed by the terrible news from Trier. My thoughts are with the victims and the numerous injured and their families. In this difficult moment, Luxembourg stands firmly by the side of our neighbours and friends."

Luxembourg, which is close to the border with Trier, has cordoned off parts of the city centre with large concrete blocks to secure the area around Grand Rue.