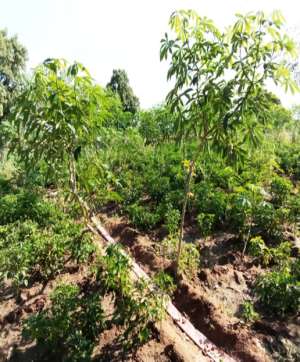 Undoubtedly, Agriculture is the mainstay of Ghana's economy. The sector is employing over 52% of the population in the active workforce. Government over the years have developed policies to boost the agriculture sectors. However, the politics of agriculture have impeded governments' strong commitment to developed tailored policy directions.

The agriculture sector in Northern Ghana is largely dependent on raid feed with most only becoming active in the rainy season. This act is compelling a lot of farmers to resort to charcoal burning, migration to some, or becoming unproductive. The lack of accessible irrigational facilities to all farmers in the country is threatening Ghana’s food security and sufficiency. Rain feed agriculture cannot meet our growing demand for food.

Remarkably, some farmers in the Kasile- Paga and Basengo Moo Communities in the Kassena- Nankana West District of the Upper East Region are taking some positive initiatives to invest in small irrigation systems for dry season farming. They have constructed wells engineered with a machine and connecting with Hydro or generator to draw water from the wells. Tubes or piles are then used to water their vegetables. This technology dotes in some households as farmers cultivate vegetables such as pepper, tomatoes, cabbage, lettuce, garden eggs and, others.

Some farmers bemoaned the lack of adequate support and capital intensive nature of developed the small irrigation scheme as a disincentive to venturing into commercial farming. They have also indicated, the lack of a ready market and the lack of storage facilities is a challenge to investing in perishable crops.

They, however, noted investing in the small irrigation system is worth it because they no longer sit idle in the dry season as the case of previous years when they lack the necessary capacity and ability to take action. It was observed that the lands used for gardens had been used to farm maize crops or legumes during the rainy season and the garden developed for dry season activities. Women, children support the men to take care of the crops in the gardening as they support in the watering of food crops.

The innovation of farmers in the Kassena – Nankana West District in the Upper East Region will soon turn the Upper East Region into a food hub in Ghana as a similar commitment of taking action in dry season farming is replicated in other parts of the region. The government must demonstrate the commitment to empowering rural farmers to actively get involved in Climate-smart agriculture.