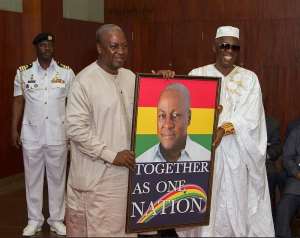 If anyone is qualified to make such an assessment, it is the former ambassador, who has worked very closely with the two politicians.

He was speaking on one of the last episodes of the popular KSM Show before Election 2020 next Monday. The Show telecast last Friday/Sunday covered a wide-ranging basket of issues, naturally including the polls. When the host of the programme, Kweku Sintim Misa asked him to call the upcoming election, Mahama (NDC) or Akufo-Addo (NPP), he “corrected” his host with the following words: “I’d rather rephrase the question: Who would you vote for?” Taken aback, KSM conceded the request and without batting an eyelid, the former ambassador looked directly into the camera lens and said: “Of course I will vote for John Mahama”. Explaining further, he said, “I believe he is a better candidate. I know the two main candidates [on the ballot] and in fairness to my conscience I think he is a better candidate.” And furthermore, nothing had happened these past four years to change his mind. He called on “fair-minded” Ghanaians to recognize the former president’s good works and join him in voting JM.

Ambassador Harruna Attah, though much older, is one of the most loyal Mahama cornermen, describing the former president as a good man – most certainly a hero.

Earlier in the middle of this year, he published a book on Mahama with the unabashed title of admiration: “Awhene Pa Nkasa. Standing with JDM”. A book that is yet to find its place in the sun because its release coincided with Professor Kwamena Awhoi’s book on former President J.J. Rawlings. The controversy that surrounded Professor Awhoi’s book eclipsed the rather genteel and soft touch of Awhene Pa Nkasa. This semi-(auto)biographical narration on Mahama is something of a labour of love and whatever happens after next week should be relaunched to reach many more readers.

In the KSM interview, he stated that Mahama “did a good job as president” and “we are seeing it now.” Expressing the views of many Ghanaians he pointed out that “the stuff he did, it was not accepted. 2015 2016, he was bashed and bashed and bashed as if he did nothing. in this country but in the last four years, some of the things he did, have kept us going, so I think in fairness to the man, he should return and just finish some of the things he started…”

Many people have openly disagreed with the shabby way in which the Akufo-Addo administration treated Mahama era legacies, including health facilities, When Covid-19 struck, it was these Mahama era investments in facilities like the University of Ghana Medical Centre, Greater Accra Regional Hospital and the Bank Hospital that became the first line facilities for containment, He also mentioned the free senior high school education as a Mahama initiative launched in 2015.

The full interview can be found on YouTube and Facebook and contains exclusive revelations on his relations with the late President Rawlings and his wife Konadu (Actually his in-laws), his prison experience, his diplomatic work, his role as pioneers in Ghana’s contemporary media landscape and more, details, which can also be found in Awhene Pa Nkasa in which he describes Mahama as one of the new African leaders with the temperament to “rise to the challenge and salvage the remaining years of our beloved continent.”