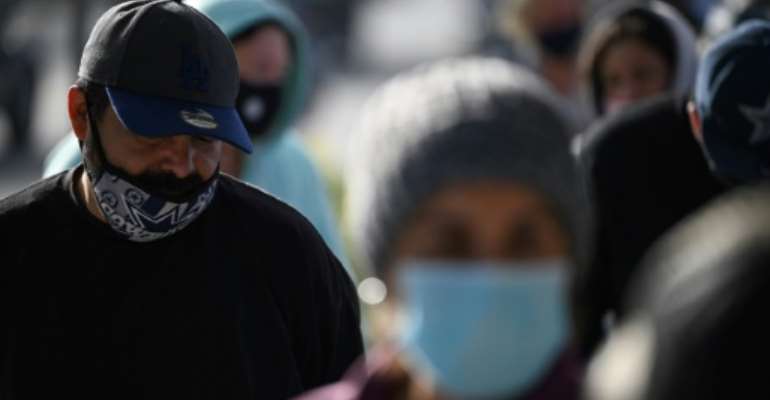 The rise in unemployment has caused a rise in hunger, with many turning to food banks to put a meal on the table. By Robyn Beck (AFP/File)

The coronavirus pandemic triggered a historic global economic shock that required determined government initiative to confront it, while reinforcing China and big US tech companies.

One figure underscores the level of crisis: in April, 20.5 million jobs disappeared in the United States.

In 1929, the world suffered a stock market crisis, in 2008 it was a financial crisis. In 2020, an external shock paralysed from one day to the next all "physical" economic sectors.

Lockdowns that affected half of the world's population were an incredible shock for a global economy that employed lean manufacturing methods that reduced stocks to a minimum and extended production lines around the planet.

Aircraft that typically carry 4.3 billion passengers a year were grounded, and tourism that accounts for 10.5 percent of global output stopped dead in its tracks. 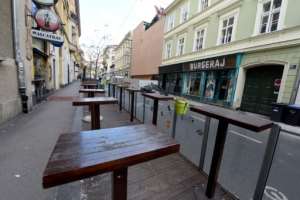 Restaurants and bars have been closed in many countries as coronavirus cases surge. By Denis LOVROVIC (AFP/File)

Shipping containers piled up on docks, public transportation and factories slowed and small shops, restaurants and theatres locked their doors.

Meanwhile, information technology, telecommunications, online retailing and pharmaceutical companies benefited from what some called a "Darwinian" crisis that accelerated the transition towards digital operations.

Unlike 2008, emerging economies were immediately hit head-on by the crisis as exports plunged, along with commodity prices.

Hopes for a sharp "V-shaped" recovery have been dashed by a second wave of virus-induced restrictions in the past few months, resulting in an uncertain outlook for 2021.

Rising chances of effective vaccines for Covid-19 becoming available in the coming months have nonetheless brightened the horizon.

Another difference with previous crises is that governments responded immediately and decisively.

Leaders in Britain, France, Italy and Spain echoed former European Central Bank (ECB) chief Mario Draghi's 2012 assurance that he would do "whatever it takes" to maintain control of the situation.

Central banks were crucial to making that happen. 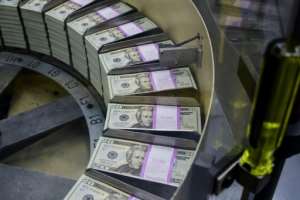 Central banks pumped huge amounts of money into the economy to avoid a meltdown. By Eva HAMBACH (AFP/File)

The US Federal Reserve, the ECB, the Bank of England and the Bank of Japan opened their cash taps to buy debt, especially when it had been issued by sovereign governments.

Countries let public deficits soar to avoid massive layoffs and unemployment, and while the eurozone's debt leapt past 100 percent of gross domestic product (GDP) in 2020, unemployment stabilised at 8.3 percent in September.

The Group of 20 (G20) advanced economies have spent around $11 trillion to support companies and households, but were still not able to avoid waves of layoffs.

The United States accounts for about one-quarter of that spending, and the European Union came up with a plan worth 750 billion euros ($900 billion), to be financed by joint borrowing that has not yet taken place.

China at the centre

At the epicentre of the Covid-19 outbreak, China's economy was hammered in the first quarter of 2020 and contracted by a record 6.8 percent.

Beijing was criticised for failing to notify the World Health Organization of the situation, but surgical masks made in China immediately became must-have items.

The Chinese economy is the only major one in the world that is expected to post growth this year, at around 1.9 percent according to the IMF.

Moreover, China's share of global trade increased owing to exports of medical products and goods used by the legions of people who began working from home, according to insurance credit group Euler Hermes. 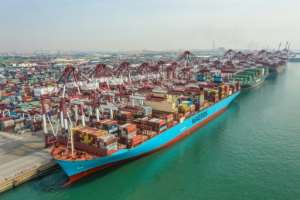 China is likely to be the only major economy to grow this year. By STR (AFP/File)

And while the US is bogged down by the virus pandemic and a difficult presidential transition, China is expanding its influence further.

In mid-November it signed the Regional Comprehensive Economic Partnership (RCEP) with 14 other Pacific-rim countries that is arguably the largest free-trade agreement ever.

China also holds the key to the looming global issue of developing countries' debt, given that is owns 63 percent of it.

Other major beneficiaries of the health crisis are US tech giants Facebook, Amazon, Apple, Netflix and Google, collectively known as the FAANGs.

With the keys to online retailing for example, Amazon sales jumped by 37 percent in the third quarter of this year to $96 billion. Netflix benefited from all the people suddenly finding themselves stuck at home.

Tech analyst Daniel Ives at Wedbush Securities noted that strong companies are even stronger now, with shares in Google gaining around 31 percent since January 1. 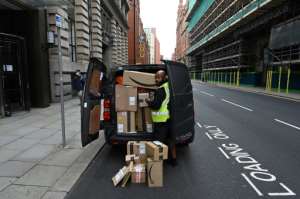 With shops closed in many countries or people reluctant to go to crowded stores, Amazon saw a surge in business. By Paul ELLIS (AFP/File)

For Facebook, the rise is 34 percent, for Microsoft it is 36 percent, for Apple 58 percent, and for Amazon, an amazing 72 percent.

Their dominance has generated resistance however, and complaints have multiplied, with French Economy Minister Bruno Le Maire calling them "state adversaries".

Among the issues cited most often are abuse of dominant market positions, spreading hate messages, disinformation, use of personal data, tax optimisation, failure to share profits with media sources and working conditions.