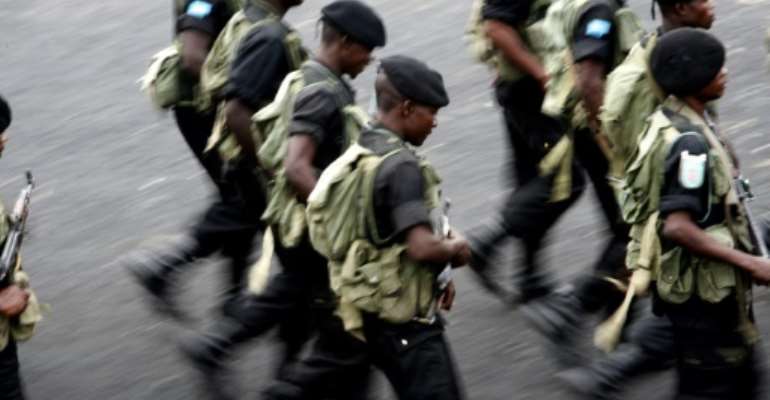 The Republican Guard is tasked with protecting DR Congo's head of state. By JOSE CENDON (AFP/File)

The head of DR Congo's elite Republican Guard has ordered his troops "not to plot" against President Felix Tshisekedi, who is embroiled in a deep crisis with supporters of his predecessor, Joseph Kabila.

In a video that began to spread on social media on Monday, Major-General Christian Tshiwewe said, "I urge you not to plot against the government by taking part in clandestine meetings. Remain patriots, imbued by loyalty (and) allegiance to the head of state."

The Republican Guard -- which is tasked with protecting the president -- is dominated by officers appointed by Kabila, who stepped down in early 2019 after 18 years in power.

His handover to Tshisekedi, after controversial elections in 2018, marked the first peaceful transition of government in the Democratic Republic of Congo's post-colonial history.

But Tshisekedi has had a troubled time since taking the helm of the sprawling central African country.

His government has to work within the constrictions of a coalition dominated by Kabila loyalists, whose Common Front for the Congo (FCC) wields a huge majority in parliament.

Tensions have erupted into the open, forcing Tshisekedi to launch consultations last month on how to proceed on key issues, including national security, the management of state assets, the independence of the judiciary and the organisation of elections.

Tshiwewe's video emerged as Tshisekedi is preparing to announce his decisions after the consultations.

Leaders in the president's own party, the UDPS, have been urging him to walk away from an unpublished pact that he forged with Kabila in January 2019.

The general said in the video that "my mission is to duly protect the head of state. Do not cause me to be mistaken.

"For us, betraying Congo is to betray the president of the republic by violating his directives."

Tshiwewe was deputy head of the Republican Guard under Kabila.

Tshisekedi has asked for the commanders of the DRC's main units and its military regions to come to the capital Kinshasa for a meeting, military sources said.

Chiefs and Queen mothers of Nadowli-Kaleo congratulate Alban...
45 minutes ago