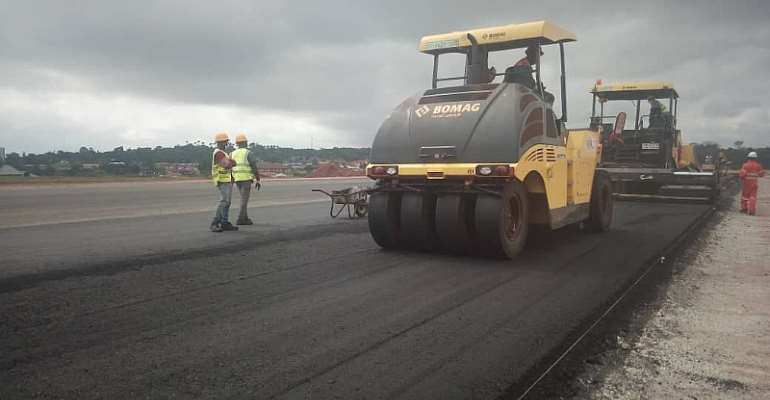 The Managing Director of the Ghana Airports Company Limited, Yaw Kwakwa, has assured the public that the Sunyani Airport would be reopened for domestic flights by the end of this year.

According to him, about 90% of rehabilitation works being carried out at the facility by government is complete and will soon be ready for use.

Mr Kwakwa made this point during a working visit to the Airport by the Deputy Minister of Aviation, Yaw Afful; the Bono Regional Chairman of the ruling New Patriotic Party, Kwame Baffoe; the Regional Secretary of the party, Kofi Ofosu Boateng and some other officials.

The visit was to assess the progress being made in the massive expansion works at the airport, which was closed down in 2016 due to the dilapidated state of the run-way as well as other facilities at the airport.

Upon assumption of office in January 2017, the current government led by President Akufo-Addo commenced rehabilitation works at the Sunyani Airport to give it a facelift.

At the time of the visit last Monday, renovation of the terminal building was virtually complete with the installation of close-circuit television cameras being the only outstanding work to be done.

Besides, the 1,520 metre run-way is over 90% complete while an apron, which has the capacity to accommodate two aircrafts at a time, has been completed.

Mr. Yaw Kwakwa noted that there was high demand for domestic flights in the Bono, Bono East and Ahafo regions and that explained why government was leaving no stone unturned in bringing the Sunyani Airport back to life.

Mr. Yaw Afful, the Deputy Minister of Aviation, who is also the MP for Jaman South thanked the President for fulfilling yet another campaign promise.

He gave the assurance that the second phase of the project will also receive attention by government upon the completion of the first phase.

For his part, the Bono Regional Chairman of the NPP, Kwame Baffoe, also known as "Abronye DC", expressed satisfaction about the progress of work at the airport and also commended President Akufo-Addo for keeping faith with the people of the area.

He said the reopening of the Sunyani Airport would not only boost economic activities in the area but also lead to the creation of jobs for people.

Chiefs and Queen mothers of Nadowli-Kaleo congratulate Alban...
52 minutes ago