The Hemafuse Solution To Donor Blood Challenge In Ghana 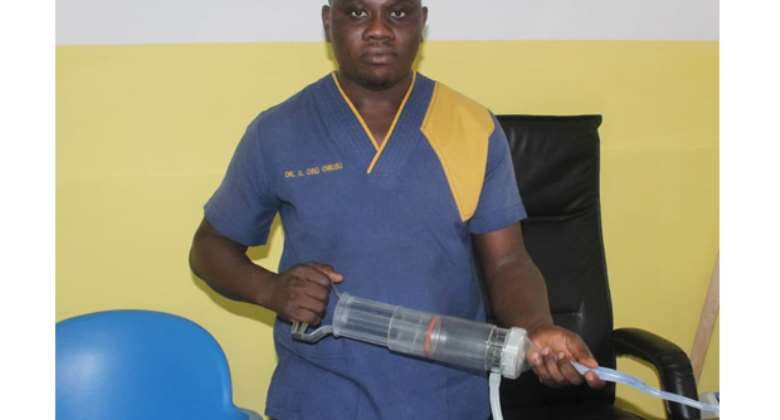 The hemafuse set contains a big syringe, which acts as the collection barrel, a nozzle connected to a filter on the syringe pulls the blood in while sieving the clots.

With a push, the blood is redirected through another tube, connected to the same syringe and operated by a stopcock, to the blood bag for transfusion back to the patient.

“We have used this device on about 20 patients since it was introduced last year,” says Dr. Gerald Osei-Owusu, medical officer at the Obs/Gyn Department of the Tema General Hospital. “We have used it for pregnant women and anybody we have used the device for has benefited from it.”

He says the device has given patients of the department, who would otherwise require donor blood transfusion, a chance to donate their own blood to themselves successfully.

According to the National Blood Service annual report on voluntary blood donation, the total units of blood collected nationwide declined by 15.2 per cent from 135,257. Collected from January to September 2019 to 114709 for the same period in 2020.

Voluntary blood donations in particular dropped sharply by about 55 per cent from 46,446 collected from January to September 2019 to 20,841 over the same period in 2020.

At the Tema General Hospital, the situation is not different. The health facility which serves patients in the Tema Metropolis and its environs hardly has enough donor blood supplies due to the reduction in voluntary blood donation.

Patients therefore have to supply blood for transfusion either from relatives or close friends before surgeries are conducted. Often, during emergencies, both medical personnel and relatives of the patient have to reach out to other major health facilities, located over 20 kilometres away, for donor blood.

“So, you can imagine the stress when a patient in critical condition needs blood and we do not have it. At times, we have donor blood but then the blood group is not available,” says Dr. Osei-Owusu.

The Covid-19 pandemic has worsened the situation as the public is not forthcoming with voluntary blood donation drives because of the fear of getting infected with the virus.

“This past Monday, we had to refer a pregnant woman with a low Hb and severe pre-eclampsia. We

could have delivered her here but immediately after that we have to transfuse blood and because we do not have her blood type (O-) we had to refer her and for almost two hours, everything was on hold and we were just making sure we referred her to a hospital that has her blood type, so the burden is quite high,” he adds.

Autotransfusion is demonstrated as safe, based on over 100 years of research; even Johns Hopkins University has shown that receiving your own blood is better than banked blood. It is also known to reduce hospital recovery time as compared to donor blood.

Dr. Osei-Owusu says in situations where a pregnant woman is brought in with a ruptured ectopic pregnancy and she is bleeding heavily inside, the team applies autotransfusion of blood.

At the Tema Genral Hospital, Dr. Osei-Owusu says the medical officers use a technique he terms, “Ladle and Soup” to auto transfuse blood for a patient.

“With this technique, we open the patient up and use an actual ladle to scoop the blood (soup) that has been collected and because there will be clots, we sieve it using a sterile goose and pour it into a blood bag and then transfuse it back to the patient,” he explains.

While the technique is known for saving lives in critical times the procedure as used in many hospitals in the country risks the blood being contaminated. “The issue with this is, it is exposed to a lot of contamination if the ladle is not sterilized properly or during the handling of blood before it goes back into the patient,” Dr. Osei-Owusu adds.

But the situation has changed since last year when Sisu Global introduced the Hemafuse device to the hospital.

With the Hemafuse device, medical practitioners like Dr. Osei-Owusu no longer have to wait for donor blood in cases of internal bleeding or use autotransfusion techniques that exposes the blood to contamination before it is transfused back to the patient.

The medical device, Hemafuse, allows doctors to autotransfuse the patients' own blood in a safe and efficient way and with less time by salvaging and filtering the blood from internal bleeding directly into a blood bag, eliminating any risks associated with donor blood transfusion.

“With the use of Hemafuse, clinicians can perform whole blood autotransfusions allowing them to salvage multiple units of whole blood during a single surgery; saving donor blood within these cases,” says Carolyne Yarina, CEO and Co-founder of Sisu Global, manufacturers of Hemafuse.

She says the device which has a specialized patented design has been extensively tested to ensure a patient's safety.

“Hemafuse went through years of testing based on guidelines established by the International Standards Organization even before it was used in its first surgery.

These test reports were evaluated by the FDA Ghana who performed further testing themselves. The patented filter was created to filter out clots and particulates, while the patented shape and smooth finish ensure that the integrity of the blood is maintained,” Yarina says.

She stressed that like any medical device, clinicians need to understand the appropriate time to use Hemafuse and ensure that the patient has clean blood to be re-transfused.

“Clean blood means blood not contaminated with bacteria, foriegn substances (ie bone cements), or any substance you wouldn't want to re-transfuse into the bloodstream. When clinicians follow the well-established guidelines for whole blood autotransfusion, a patient's own blood is the best option,” she adds.

Hemafuse has been successfully used on pilot basis in major hospitals in Ghana – Korle Bu Teaching Hospital, Komfo Anokye Teaching Hospital and Tema General Hospital – as the preferred option over donor blood and as the only option for blood.

The majority of cases for which Hemafuse has been used for if ruptured ectopic pregnancy. In the first three months of the pilot, which begun in the later part of 2019, there was an exponential increase in the use of Hemafuse at the health facilities.

“We are proud that Hemafuse is in use at many hospitals where the idea for the Hemafuse was conceived. Hemafuse has already saved many lives, and has the potential to impact millions of lives in the next five years.

Clinicians are the true heroes and we are proud that Hemafuse has empowered them to save more lives,” Caroline Yarina says.

She indicates that the goal is to reach as many hospitals as possible.

“We recognize that now is a crucial time for Hemafuse as one of our top use cases for Hemafuse, ruptured ectopic pregnancies, are particularly common and severe at this time. There is nothing more precious than the lives of our mothers,” she asserts.

Dr. Osei-Osuwu suggests that the government absorbs the cost of the device to make it affordable to hospitals who would want to purchase.

“We do not sell blood but the processing is about 150 to 200 Cedis for a paint and medically we transfuse two which will cost a total of 300 to 400 Cedis per a transfusion.

As it stands now, we are taking 200 Cedis for using the device so if you are able to collect two or three from one patient with this device you can now deduce the benefit, financially,” he explains.

The hemafuse medical device in use at the Tema General Hospital