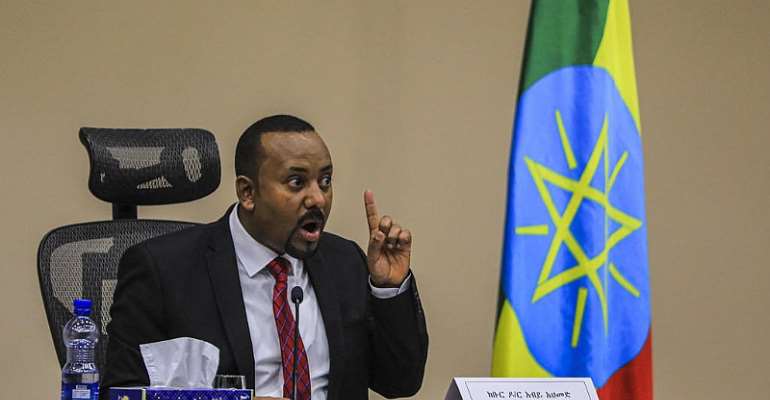 Abiy said Ethiopian forces had monitored leaders from Tigray's ruling party leaving Mekelle, moving to the north west of the city in an area between the towns of Hagere Selam and Abiy Addi.

The Ethiopian leader said federal soldiers held off from attacking the TPLF leadership since they retreated with their wives, children and abducted soldiers. But he said this would “not continue”, according to the AFP news agency.

During an address to Ethiopian parliamentarians lasting almost four hours, Abiy heaped praise on Ethiopian troops, describing them as “disciplined” and “victorious”.

TPLF leader Debretsion Gebremichael denied reports that he had fled to South Sudan, the Reuters news agency reported, citing a text message in which he said he was “close” to Mekelle, and was “fighting the invaders”.

It is impossible to independently verify claims by both sides in the conflict, with restrictions on journalists reporting from the Tigray region, and a near complete communications blackout over the course of three weeks of fighting.

Hundreds or possibly thousands of people are feared dead in fighting between Ethiopian troops and forces loyal to the TPLF.

Abiy launched the offensive following an alleged attack orchestrated by the TPLF against Ethiopian soldiers stationed in the region. The TPLF denied it carried out such an attack.

Humanitarian agencies report tens of thousands of refugees fleeing from the northern region, crossing the border into neighbouring Sudan.

The Ethiopian prime minister on Saturday claimed victory in their operation, saying federal forces had secured the city of Mekelle. However, the TPLF has said it will continue to fight Ethiopian soldiers as long as they occupy Tigrayan soil.

Abiy said “not even a single person” was injured by the operation in Mekelle, AFP reported.

The International Committee of the Red Cross said on Sunday that hospitals in Tigray were struggling to care for the wounded, with one hospital in Mekelle registering 80% of patients receiving treatment for trauma injuries.