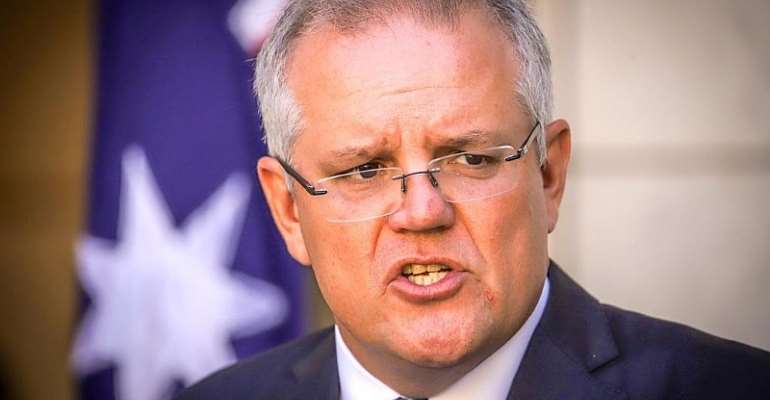 Australia's diplomatic relations with China took a further nosedive this week after a Chinese official posted a controversial 'doctored' image on social media of an Australian soldier threatening an Afgan child with a knife.

Australia's Prime Minister Scott Morrison has demanded an apology for the incident. The spat comes on the heels of a damning report into human rights violations by Australian soldiers in Afghanistan.

Chinese foreign ministry spokesman Zhao Lijian sparked the outrage when he posted a staged image of a man dressed as an Australian soldier holding a bloody knife to an Afghan child's throat.

Next to it appear the words "Don't be afraid, we are coming to bring you peace."

Morrison called the tweet -- posted on an official Chinese government account -- an "outrageous and disgusting slur" against the Australian armed forces and called on Twitter to take it down.

"It is utterly outrageous and it cannot be justified on any basis whatsoever. The Chinese government should be totally ashamed of this post," Morrison said in a press conference on Monday. "It diminishes them in the world's eyes."

Asked about the tweet at a regular press briefing, Chinese foreign ministry spokeswoman Hua Chunying replied that Australia should "make a formal apology to the Afghan people", adding that "it is a fact that Australian soldiers brutally slaughtered innocent civilians in Afghanistan".

Government investigators have recommended 19 individuals be referred to the police, compensation be paid to the families of victims and that the military carry out reforms.

Last week, the Australian army moved to discharge 13 soldiers for their role in the alleged atrocities and prosecutions are expected.

Afghan President Ashraf Ghani said earlier in November that Morrison had called him personally to express his "deepest sorrow" over the allegations.

Relations between Australia and China in free fall

China recently introduced a string of economic sanctions on Australian goods and state-controlled news outlets have repeatedly attacked Australia over a range of issues.

The ill feeling appears to have been prompted by Canberra's decision to push back on Beijing's growing power in the region, to crack down on Chinese influence operations and to call for an independent investigation into the origins of the coronavirus pandemic.

"This sort of conduct is not conducive to any relationship," Morrison said of the tweet. "That's why I think it's so important in our mutual interests that this egregious act be dealt with."

China, a one-party authoritarian state, has been accused of systemic, wide-ranging human rights violations for decades, most notably in Tibet and Xinjiang.