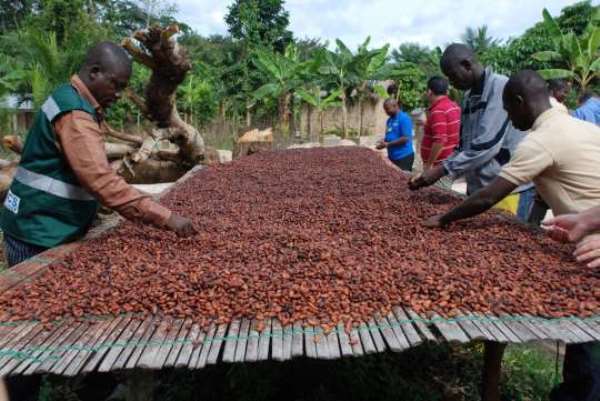 I am by this publication appealing to ALL COCOA FARMERS throughout Ghana to go out in their numbers as never happened before in the election history of Ghana, to VOTE MASSIVELY for Nana Akufo-Addo and his New Patriotic Party (NPP), come Monday, 7 December 2020, presidential and parliamentary elections.

Why am I being very particular about cocoa farmers, although the majority in the country expects all rational Ghanaians to vote to re-elect Nana Akufo-Addo and the NPP, one may ask?

My answer to the above posed question is very simple. I am myself the son of a cocoa farmer. I know how the children of cocoa farmers labour to sustain the economy of Ghana, cocoa once being, and still is, the backbone of Ghana’s economy. Is it not with reference to cocoa farming that Ghana is seen to be guilty of child labour? Is it not in cocoa farming that a greater number of children are seen laboriously aiding their parents to sustain their subsistence living and by extension Ghana’s economy? Yes, it is.

Was the first Cocoa Clinic by the CMB not built in Accra? Do they grow cocoa in Accra? What was the motive for building cocoa clinics in Ghana? Was it not for the healthcare of cocoa farmers? Why was the first one then built in Accra? Do cocoa farmers live in Accra or did we expect any farmer and their families seeking healthcare to travel to Accra to avail themselves of that opportunity?

Again, what was the benefit of the COCOBOD Guest House built in Bole Bamboi in the Savannah Region of northern Ghana to cocoa farmers? Do we grow cocoa in the northern regions of Ghana? No! What are the misplaced priorities!

Now, there is a visionary leader in the person of Nana Akufo-Addo, who sees the sufferings of, and sacrifices by, poor cocoa farmers. Therefore, he wants the cocoa farmers to benefit from their labour much as others, hence has implemented the policy of free Senior High School education.

Cocoa farmers will no longer be the baboons working in the mid-belt jungles while some monkeys in the south and the north are “chopping”, an inference to the popular saying, “Baboon de work, monkey de chop”.

There must be an equal opportunity for all to prosper. This is the vision by the incorruptible, farsighted, dynamic and selfless Nana Akufo-Addo, a man prepared to die in the service of his nation.

No wonder that the son of Kumawu/Asiampa, Rockson Adofo, has been very supportive of then sexagenarian but now septuagenarian Nana Akufo-Addo, from the very inception of his decision to serve Ghana as president. Rockson could see something great in him hence joining the few those who proudly called him by the nicknames Moses, David or Joseph. They were biblical liberators of their people from slavery or intimidations under the hands of others. Nana Akufo-Addo has come to liberate Ghanaians and Ghana from the hands of the short-sighted but insatiably greedy NDC crooks.

If there was free secondary school education in the 1960s and 1970s, many of my father’s children could have availed themselves of it to become great people but not to die poor as they did. May their souls rest in perfect peace.

For the very decision by Nana Akufo-Addo to ensure poor cocoa farmers are not segregated from benefitting from higher education that has the potential to unleash the exploitation of the unlimited potential in each child, regardless of their family background, for the benefit of the nation, I call on all cocoa farmers to give their vote to Nana Akufo-Addo and NPP in what Nana Kwame Ampadu, the nation’s acclaimed music king says, “ASEDA ABA TO3” (Thank you to you vote), come Monday, 7 December 2020.

This write-up reminds of a time spent with my brothers and sisters on my father’s cocoa farms at Oseikrom in the Mpasaaso in the Ahafo district.

May the souls of my parents and that of honest cocoa farmers passed away rest in perfect peace.

Another Daughter of Ex-President Rawlings pops up
1 hour ago