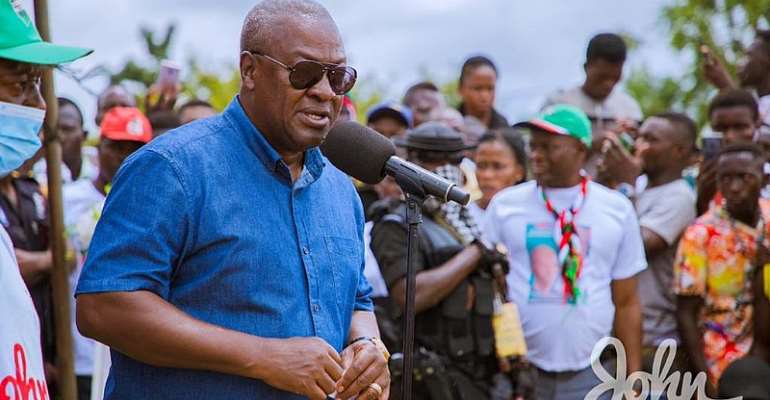 Flagbearer of the National Democratic Congress (NDC) John Dramani Mahama has accused President Akufo-Addo of buying the votes of Police officers for GHS1000 and GHS2000 as the country prepares for the December 7 election.

He urged the Police service to take the money the government is paying into their account and vote against them on 7 December.

Mr Mahama said: “Our economy is at the worse level possible, we have debts holding us up to our neck and people are suffering, everything is going bad and so all he has now is to try and buy the election and so they are spending money as if there’s no tomorrow.

“I just learnt from a group of Police officers that they’ve paid monies into their accounts, all police officers, because they know that they have destroyed the morale of the Ghana Police Service.

“Today, the Ghana Police Service don’t have the confidence and courage that they use to have before because he’s infiltrated the Police service with all kinds of thugs and hoodlums, invisible forces, delta forces, who have no sense of discipline.

“Promotion in the service is based on your political colour instead of your merit and he thinks he can buy our police officers with GHS1000 or GHS2000 just because an election is coming.

“They will take that money and they will vote against him.”

Mr Mahama further bemoaned recruitment and job description of the national security under the presidency of Nana Akufo-Addo.

“If there is a situation, they ask the police to go in or the army to go in, they coordinate but because they’ve gone to put their invisible forces, delta forces, thugs in the national security, they’ve given them weapons.

“I was very sad when during the registration exercise, I saw somebody ostensibly from national security, one of these delta forces in plain cloth holding a pistol and threatening a police man in uniform and instead of the police and soldiers there slapping the day lights out of him, they were following him and begging him…”