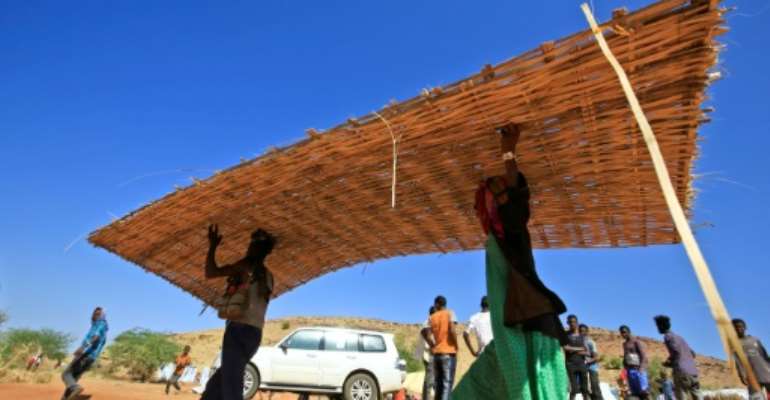 The Um Raquba refugee camp in eastern Sudan once housed Ethiopians fleeing famine, but now life has flooded back into the isolated camp as refugees seek safe haven from the Tigray conflict.

"A month ago, this was just a piece of desert, but now it's turned back into a town," camp director Abdel Basset Abdel Ghani told AFP.

The sound of hammering and digging rings out as people build temporary huts, while elsewhere children take lessons in makeshift classrooms.

Young people kick a football around in the dust while others line up to refill containers of water.

More than 44,000 refugees have crossed into Sudan since fighting broke out in Ethiopia's northern Tigray region on November 4, according to the UN refugee agency (UNHCR).

The rapidly growing Um Raquba refugee camp, located some 80 kilometres (50 miles) from the border, once housed refugees who fled Ethiopia's 1983-85 famine that killed more than a million people.

More than 44,000 refugees have crossed into Sudan since fighting broke out in Ethiopia's northern Tigray region on November 4, according to the UN refugee agency. By ASHRAF SHAZLY (AFP)

It was closed 20 years ago but reopened for a second time earlier this month.

Tasfai Burhani and his wife, who arrived Thursday from the Hamdayit transit centre in neighbouring Kassala province, are among those building a hut for themselves.

Authorities have assigned them a 200 square metre (over 2,100 square feet) area and have provided them with rudimentary materials and tools to make the wicker shelters.

Others less inclined to build the structures themselves or who are convinced their stay will be brief have opted for white tents distributed by UNHCR.

Other camps near the border are transit centres where new arrivals are registered before being directed towards Um Raquba.

The camp now houses almost 9,700 people, according to the UN refugee agency.

Some 2,100 huts have been set up since the settlement was reopened this month, camp director Abdel Ghani said.

Toilets have been put in place across the camp and UN children's agency UNICEF has installed water tanks. By ASHRAF SHAZLY (AFP)

Toilets have been put in place across the camp and UN children's agency UNICEF has installed water tanks.

"Luckily the region has a lot of (underground) water, even though the infrastructure is poor," Abdel Ghani said.

He said the camp can accommodate "20,000 people, but the number of arrivals here is constantly going up."

An additional 3,000 huts are planned to fill the gap in demand, he added.

Shelters were initially concentrated in the middle of Um Raquba, but now extend for a radius of up to a kilometre, AFP correspondents said.

At the centre of the settlement, international organisations have opened offices that people visit in the hope of receiving aid.

Small vegetable stands have sprung up too, and while some refugees prefer to prepare their food themselves with ingredients distributed by the United Nations, most queue up three times a day for meals from the World Food Programme's tents.

Sitting on the ground in one hut, around 50 young children were excited to be back at school after the trauma of fleeing conflict.

"We have two schools in the camp, each school has 600 children," aged seven to 17, Will Carter, country director for the Norwegian Refugee Council in Sudan, told AFP.

Without paper, pens or a blackboard, the children repeated the numbers from one to 10.

"We are lucky that among the refugees who fled we have some teachers," Carter said.

"Now, we give them basic maths, Tigrean language and English (lessons)."

According to UNHCR, 45 percent of the refugees are children.