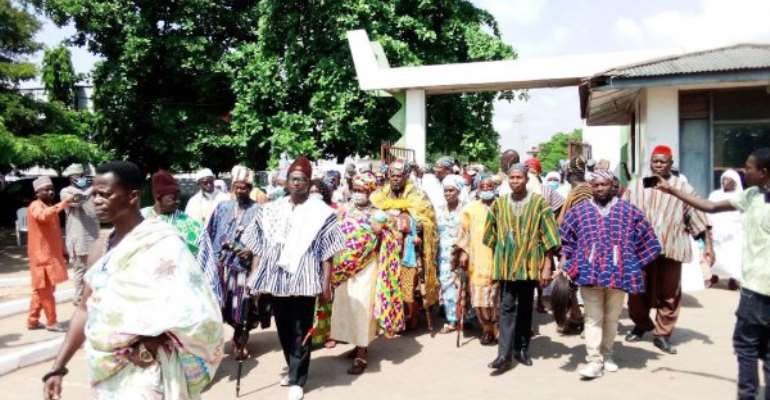 With barely a week to Ghana's 2020 December elections, it has become crucial that the country secures and consolidate its enviable peace and democratic journey.

It is in this direction that the Council of Inner-City Tribal Chiefs and Queen Mothers have joined advocates of peace to admonish Ghanaians to prioritise nothing but peace in the upcoming general elections.

The Council said this at a press conference prior to its mini durbar; "My People, Your People, Our People," held to address the community in Accra.

The durbar was on the theme; "Promoting Peace through culture".

Speaking on behalf of King Mohammed Zuntaba, President of the Council, Dr Abubakar Mohammed Marzuq, spokesperson of the Council, said the polling stations were not battlegrounds but a peaceful place for citizens to exercise their democratic rights.

He urged political parties to conduct themselves in a manner that would not undermine the nation's democracy.

"Politicians, religious leaders, tribal leaders, the youth and all well-meaning citizens should unite to ensure a peaceful election," he said.

He said they should prioritise unity over division and peace over violence.

Mr Otto Lungmagne, Director Human Resource Management Department, Representative of the Minister of Tourism, Arts and Culture, and the National Commission on Culture at the durbar said the collaboration between the Council and the Centre for National Culture was remarkable and worth emulating.

Pointing to the Ghana flag by his side, he said; "We are united by the national flag and should not be divided on political lines, despite our differences we are one," he said.

Nuumo Akwaa Mensah III, Chief Wulomo, Ga State said; "I do not see different people here but one, no matter our differences let's a unit in love for peace".

He advised voters to return home after casting their votes on elections day.

Mrs Alice Alima Kala, Director, Centre for National Culture, Greater Accra, said the durbar formed part of the centres' initiatives to ensure peaceful elections before, during and after December 7.

She said the Chiefs and Queen Mothers were key players to maintain a peaceful Ghana because when they speak to the youth of their communities they obey.

She said the youth should not allow themselves to be used as instruments to perpetrate violence.

"In spite of our differences we dance to the same beats," she said.

She said all should keep to the COVID-19 protocols to keep safe.