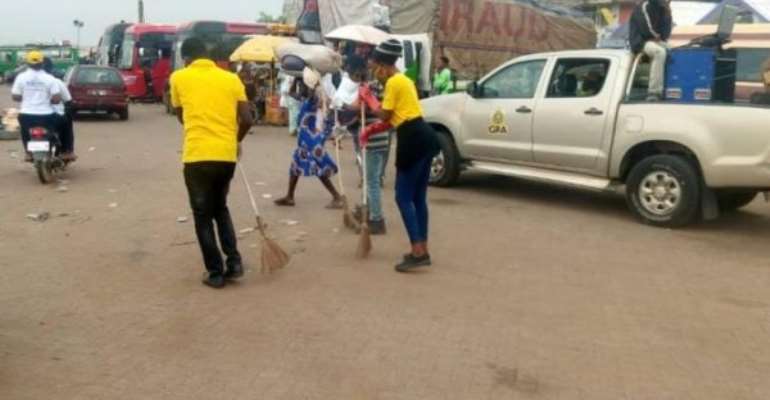 A clean up exercise has been organised by the staff of the Ghana Revenue Authority (GRA) in Bolgatanga, the Upper East Region, to inculcate the principles of good sanitary conditions among citizens.

The exercise also formed part reawakening the spirit of cleanliness and positive behavioural attitudes towards sanitation.

The routine exercise which was done through the major places in the Bolgatanga Township including both old and new markets, lorry parks, gutters, principal streets among, was part of the Corporate Social Responsibility of the Authority to its clients, the taxpayers.

It was also part of measures instituted by the GRA to contribute to making the environment clean, conducive and instill the habit of good sanitation and hygiene practices and attitudes in the citizenry.

Briefing the media after the exercise, Mr Baffour Yaw Asare, the Bolgatanga Sector Commander, Customs Division of the GRA, noted that the initiative which would be carried quarterly was to contribute to making the environment safe for Ghanaians to transact their businesses and pay taxes regularly.

“We are doing this exercise to ensure that the tax paying public has a healthy environment to work in because it is only when the taxpayer is healthy that he can work to generate income which we can also tax and mobilize the needed resources to develop this nation,” he said.

The Sector Commander explained that some of the diseases such as cholera, malaria, typhoid among other communicable disease breed in filthy environments and it was therefore imperative to contribute to efforts geared towards creating an atmosphere the tax paying population could engage in productive ventures, make enough income and in turn file their tax returns accordingly.

Mr Asare noted that the exercise would further boost government's efforts of ensuring a clean Ghana and accelerate the achievement of the Sustainable Development Goals particularly goal six which puts emphasis on attaining clean water and sanitation for all by 2030.

The Commander explained that although the revenue generation of the Authority suffered a bit of setback due to emergence of the coronavirus disease pandemic with the related restrictions imposed by government, revenue mobilization had begun improving.

“Revenue has started improving as at August and we are meeting our monthly targets of GH¢1.5 million and since September we have been hitting it, so it is our hope that with last five weeks to the end of the year we will be able to recover a lot of what we lost through the COVID,” he added.

As part of the exercise, the Commander noted, all the cleaning equipment used for the exercise including the shovels, wheelbarrows, brooms among others would be donated to the Regional and the AfriKids Hospitals both in Bolgatanga.

Mr Asare therefore encouraged Ghanaians to endeavor to clean their surroundings to ensure that the country was able to fight many diseases and the human resource base was healthy enough to contribute to the sustainable development of the nation.

He appealed to Ghanaians to ensure peaceful elections and added that his outfit had deployed 30 personnel to support the Ghana Police Service during the election and the security personnel were poised to deal with perpetrators of violence.