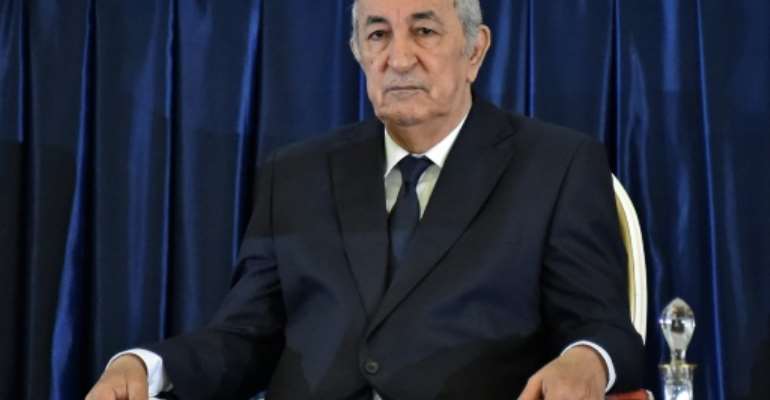 In this file photo taken on December 19, 2019, Abdelmadjid Tebboune is seen during his formal swearing-in ceremony as Algerian president. Tebboune was admitted to hospital in Germany on October 28 and has tested positive for coronavirus. By RYAD KRAMDI (AFP/File)

A month after Algerian President Abdelmadjid Tebboune was hospitalised in Germany and tested positive for coronavirus, uncertainty about his health is fuelling questions about the country's leadership.

Tebboune, who is 75 and a heavy smoker, was admitted to hospital in Germany on October 28 to undergo "in-depth medical examinations", according to the presidency.

He was transferred from a facility in the Algerian capital days after going into self-isolation following reports of novel coronavirus cases among his aides.

A day before he was transferred abroad, the presidency said Tebboune's "state of health does not raise any concern" but a week later it announced that he had contracted the Covid-19 illness.

On November 8, it said Tebboune was "in the process of completing his treatment" and that his health was "constantly improving". A week later it said he had finished treatment and was undergoing "post-protocol medical tests".

Since then, there has been deafening silence, except for a report last week by the official APS news agency saying that German Chancellor Angela Merkel had sent Tebboune a letter of good wishes.

The fragmented information and lack of any photographic evidence of Tebboune's state of health are fuelling speculation at a time when Algeria is experiencing a resurge of its coronavirus outbreak.

For many Algerians, the developments have recalled the power vacuum that followed the hospitalisation of former president Abdelaziz Bouteflika.

The veteran leader -- who stepped down in April 2019 weeks into mass protests against his bid for a fifth term -- had suffered a debilitating stroke in early 2013 and stayed in hospital abroad for nearly three months.

"Hennad said that "if his prolonged absence poses a problem, it is not because of the illness itself, but because the authorities... complicate things unnecessarily."

Some are starting question whether Article 102 of Algeria's basic law should be applied in order to avoid a constitutional crisis.

Hennad said that under the article, a power vacuum was viewed in two stages: "temporary impairment (of the president), for a maximum duration of 45 days, then resignation" beyond that duration.

Were that to occur, Salah Goudjil, the 89-year-old interim senate president who fought in Algeria's 1954 to 1962 war of independence against France, would serve as acting president, pending the election of a new head of state.

Tebboune's illness meant he was out of the country for a November 1 referendum on a revised constitution seen as aiming to bury a mass protest movement and boost the president, elected on a record low turnout last December.

Algeria has officially recorded more than 80,000 novel coronavirus cases and more than 2,000 deaths.