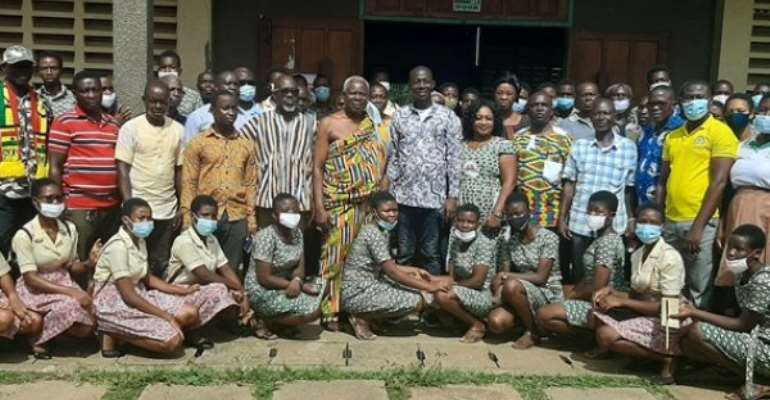 All three parliamentary candidates in the Lower Manya Krobo Constituency, have successfully participated in a parliamentary debate organised by the National Commission for Civic Education (NCCE).

The main aim of the debate was to give a platform for the three parliamentary candidates in the area, to sell out their campaign messages to the public.

She said the debate was to provide an opportunity for the potential Members of Parliament (MPs) in the area to interact with their constituents in a more coordinated manner and entreated all to tolerate each other's political views before, during, and after the elections to ensure free and fair elections.

However, two out of the three candidates vying for the Lower Manya Krobo seat including Mr. Ebenezer Okletey Terlabi (NDC) and incumbent MP and Mr. Daniel Ofoe (GUM), failed to show up for the debate, leaving Mr. Samuel Nuertey Ayertey, NPP candidate and Deputy Eastern Regional Minister enough time to outline his vision for the area when given the nod.

The NPP candidate indicated that illiteracy was a major concern of the people and said he would liaise with the District Education Directorate to continually conscientise community members on the benefits of education to help minimise the situation.

Mr. Ayertey, speaking on what he intended to do for Persons With Disability (PWDs), said he would provide an office space to be used for conferences and workshops as well as a means of transportation to facilitate their movements.

He disclosed that over 30 young people had been engaged under the Youth in an Apprenticeship program by the District Assembly and noted that when given the nod, he would collaborate with the Assembly to expand the program to benefit more young people.

He said the Krobo area had received its fair share of the developmental agenda, contrary to perceptions that the NPP did not focus on the Krobo area and appealed to the electorate to vote massively for him and President Akufo-Addo, come December 7.