Ghanaians No Longer Surprised By Corruption Under Akufo-Addo, NPP---Mahama Jabs 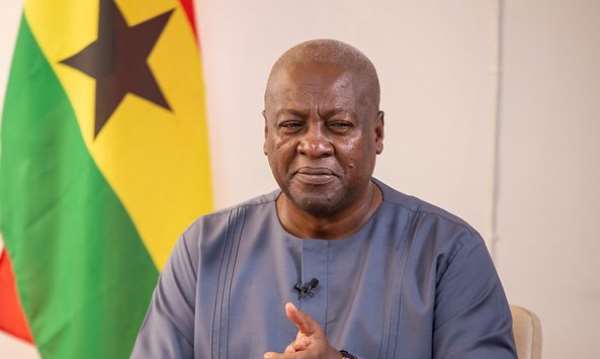 "Ghanaians no longer find the series of corruption under the Akufo-Addo administration shocking so they remain numb," these are the words of Former President John Mahama who believes this is the stage where Ghana has reached in the fight against the corruption canker.

In an interview on Pan African TV on Saturday morning, Mr. Mahama was lamenting what he described as the Akufo-Addo administration’s mismanagement of the energy sector through corruption, amongst others.

He maintains that the defunct Power Distribution Services was a “strange creature” and an avenue for corruption that should have led to more outrage.

The agreement between the government and PDS was terminated in 2019 due to what was termed fundamental and material breaches.

PDS was, in July 2019, found to have presented invalid insurance security for the takeover of ECG assets.

“When they came they saw an avenue to make money for the family. You can hear Gabby [Otchere Darko's] voice clearly negotiating shareholding in PDS.”

“We are too shocked by the corruption of the Akufo-Addo administration that nothing shocks us anymore so now when huge amounts of corruption happen, people don't have the energy to talk about it again,” Mr. Mahama said.

“PDS has taken some the Electricity Company's revenues, more than GHS200 million, and put int in the commercial bank here and that money is earning interest and we need to ask then who the interest is going to.”

Mr. Mahama has already pledged to cause an investigation into the botched power agreement if he is elected as President in the 2020 polls.

The NDC has consistently asked the government to render a detailed account of revenue generated from the PDS deal.

According to the opposition party, the government's decision to terminate the fraudulent contract with PDS has led to a huge loss of state funds that must be properly accounted for.