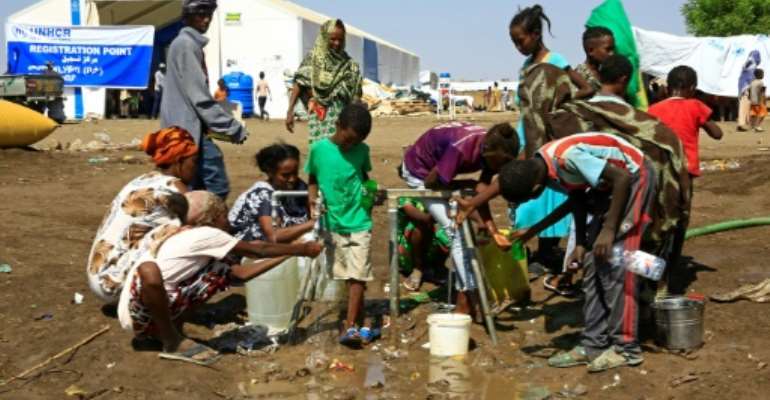 Tens of thousands have poured into neighbouring Sudan. By ASHRAF SHAZLY (AFP/File)

Heavy shelling rocked the capital of Ethiopia's Tigray region Saturday as the city of half a million braced for an all-out offensive by government forces against its dissident leaders.

Ethiopia's military "has started hitting with heavy weaponry and artillery the centre of Mekele", the local government said. Two humanitarian officials with staff in the city confirmed the strikes.

"The Tigray regional state calls upon all who have a clear conscience, including the international community, to condemn the artillery and warplane attacks and massacres being committed," the statement said.

More than three weeks of fierce fighting has left thousands dead "including many civilians as well as security forces", the International Crisis Group said Friday.

Tens of thousands of refugees have streamed over the border into Sudan.

The conflict has sparked fears of a humanitarian crisis. By ASHRAF SHAZLY (AFP/File)

Abiy announced Thursday he had ordered a "final" offensive on TPLF leaders, and Ethiopia's military says it has encircled the city.

A communications blackout in Tigray has made it difficult to verify claims from both sides about how the fighting is going.

A spokesman for a crisis committee formed in response to hostilities in Tigray did not immediately respond to a request for comment Saturday about reported shelling in Mekele, which has already been hit by air strikes.

A spokeswoman for Abiy's office referred AFP to past statements indicating military operations would be undertaken "strategically" to avoid undue harm to civilians.

In its statement Saturday, the Tigray government accused Abiy of teaming up with Isaias Afwerki, president of neighbouring Eritrea, for the assault on Mekele.

"The Tigray regional state would like it to be known to friends and enemies alike that it will give proportional response to the massacres and property damages being done by those fascists," the statement said.

The TPLF dominated Ethiopian politics for nearly three decades before Abiy came to power in 2018, and it fought a brutal border war with Eritrea that killed tens of thousands between 1998 and 2000.

Abiy won his Nobel in large part for initiating a rapprochement with Isaias in 2018.

Ethiopia has denied enlisting Eritrean military support in the ongoing operations in Tigray, though it has acknowledged using Eritrean territory.

Residents of the border city of Humera, in western Tigray, have told AFP that shells fired from Eritrea hit both residential and commercial structures during fighting earlier this month.

At least one rocket fired from Tigray targeted Eritrea's capital, Asmara, on Friday night, regional diplomats told AFP. There were no reports of casualties or damage.

Global concern has heightened in recent days for the fate of Mekele's residents, with world leaders and human rights groups warning of possible rules of war violations during operations there.

Pope Francis is among those worried about the intensifying fighting, loss of life and displacement, Vatican media head Matteo Bruni said Friday.

Abiy's government has said the military campaign in Tigray was triggered by attacks by pro-TPLF forces on federal army camps in Tigray beginning the night of November 3.

Abiy has repeatedly resisted calls for a halt to fighting and negotiations with TPLF leaders, saying they need to be disarmed and apprehended.

On Friday he met with three African ex-leaders -- Joaquim Chissano of Mozambique, Ellen Johnson Sirleaf of Liberia and Kgalema Motlanthe of South Africa -- dispatched this week by the African Union as mediators.

His office said afterwards that the government has a "constitutionally mandated responsibility to enforce rule of law in the region and across the country".

The military expects to take control of Mekele "within a few days", according to a report Saturday from state-affiliated Fana Broadcasting Corporate.

‘You can’t beat NDC in spreading lies, falsehood and propaga...
5 minutes ago

A/R: Am your Messi, kick me out from NPP and you'll suffer l...
5 minutes ago