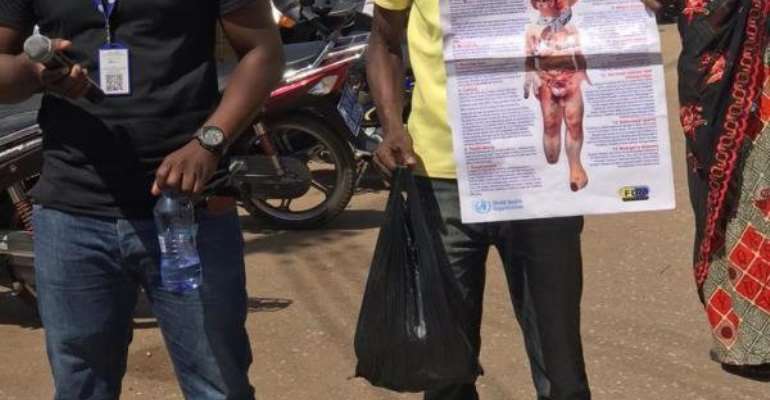 The Food and Drugs Authority (FDA) has taken its public education on the ban on smoking in public places to market centres, lorry stations, hospitals, schools, restaurants and hotels in the Upper West region.

The FDA used the platform to educate traders, drivers and consumers on the law banning smoking in public places.

The authority also displayed educative materials on the harmful effects of smoking and warning signs against smoking in public places such as the Central Market, Kejetia and Fadama Market in Wa where the sensitisation took place as well as some public places at the Nadowli/Kaleo District and Lawra Municipality.

Speaking to the Ghana News Agency (GNA) in Wa after the exercise, Mr Albert Ankomah, the Upper West Regional Head of the FDA, stated that they would also visit restaurants and hotels to educate the mangers on the law and to display the education materials at their premises.

The sensitisation was to inform the public about the harmful effects of tobacco smoking as well as to reduce the incidence of public smoking of tobacco and tobacco products among traders, drivers and their mates among others.

Section 58 of the Public Health Act, Act 851 (2012) stipulates that “A person shall not smoke tobacco or a tobacco product or hold a lighted tobacco product in an enclosed or indoor area of a work place, or in any other public place except in a designated area”.

According to him Smoking tobacco and tobacco products was not only harmful to the smoker alone, but also to the people around who inhaled the smoke, hence the need to ban smoking in public.

He noted that mangers of those public places must put inscription indicating that smoking in those places was prohibited.

He said hotels and restaurants could, however, have designated places for smoking with the inscriptions clearly displayed.

Mr Ankomah stated that smoking tobacco and tobacco products could cause serious health challenges including cancer, heart diseases, stomach ulcers, cervical cancer and miscarriage, and deformed sperms among others.

He advised the general public to report persons who smoked at public places to the managers of those places for the necessary actions to be taken against them.

Mr Ankomah added that people who smoked shisha also risked contracting side effects as smoking tobacco and its products.

While advising the general public to desist from smoking, the FDA Regional Boss entreated managers of public places to beware of the law banning public smoking and to enforce such laws at their respective places to the latter.