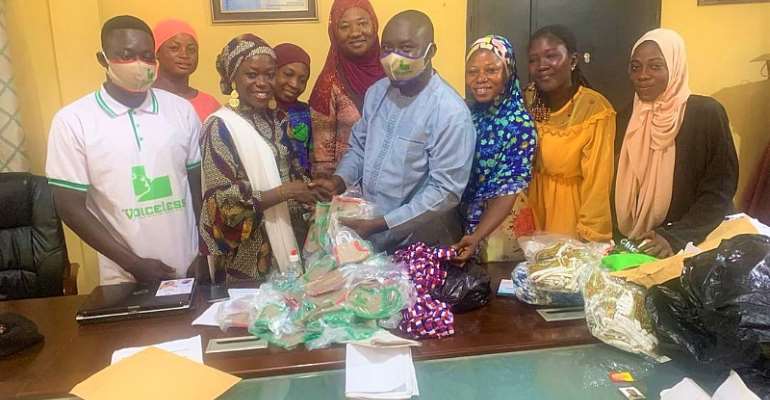 The Voiceless Media and Consult has donated 200 NPP branded bracelets and 100 Voiceless media customized nose masks to a pro-NPP Ladies Group known as the Barihama Ladies in Tamale.

The donation was done at a short but colourful ceremony on Friday, November 27, at the campaign office of the NPP Parliamentary Candidate for the Tamale Central Constituency, Dr. Ibrahim Anyars Imoro also known as Dr. Barihama.

Hajia Mutia, the Coordinator of the Barihama Ladies, together with other members of the group received the items and thanked the Voiceless media, not for only the donation but its massive promotion of the activities and programs of the group.

Speaking later in an interview, Chief Akilu Sayibu, of the Voiceless Media, explained that the donation was their modest contribution to the activities of the Barihama Ladies in the Tamale Central constituency and the entire Northern Region.

The objective of the donation was to inspire, encourage, and motivate the group to continue to do their best for the NPP.

The Voiceless Media has, in recent times, donated customized nose masks to all the Regional Communications Wings of the NPP in the five Northern Regions in the wake of the COVID-19 Pandemic.

The Elections and Research Wing of the NPP in the Northern Region also received support from the Voiceless media including the Tamale North constituency and the Ward K Electoral Area.

The Presidential Candidate of the NPP, Nana Akufo Addo, the running mate Dr. Bawumia and all Parliamentary Candidates in the five Northern Regions and other Constituencies have all received massive publicity from the Voiceless Media as part of its Social Responsibility to the party.

There is possibility of a lockdown, other restrictions – Opp...
31 minutes ago