Put All Differences Aside, Focus On Building Peaceful Ghana - CSOs In Governance And Security Warn Politicians 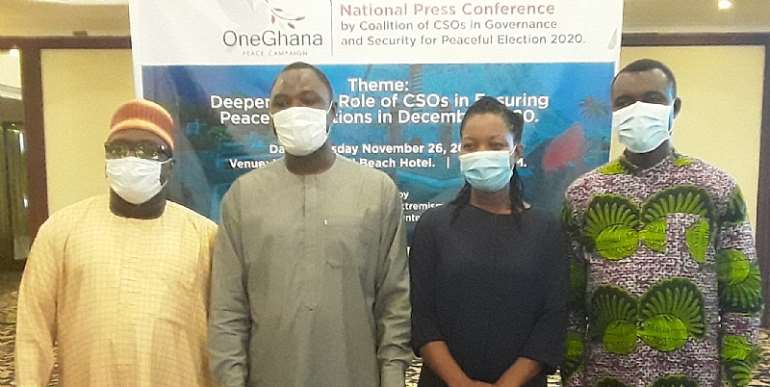 The Coalition of CSOs in Governance and Security as part of their campaign for peaceful election 2020 has admonished all political party leaders and their activists to be mindful of their utterances whenever they engaged their supporters, communities or the media, in order to safeguard the peace of Ghana.

It further admonished the political leaders to put all differences aside and focus on uniting the people and building a peaceful nation before, during and after the 2020 election.

At a Press Conference in Accra addressed by its Spokesperson, Mr. Mutaru Mumuni Muqthar, the Coalition of CSOs in Governance and Security also expressed grave concern about the continuous endorsement and use of vigilante groups by political parties in spite of the legislation against it. It also spoke against the use of hate speech, electoral irregularities, intimidation and harassment of political opponents among others which mostly affect voter turnout in Ghana’s general elections.

The maiden national press conference was organized by the Coalition of CSOs in Governance and Security for Peaceful Election 2020 in collaboration with the West Africa Centre for Counter-Extremism (WACCE) and the Africa Centre for Security and Counterterrorism.

It was under the theme: “Deepening the Role of CSOs in ensuring peaceful elections in December 2020”, and it was intended to provide updates to Ghanaians on the electoral process, incidences of violence, preparation for peaceful conduct of the elections and activities the coalition has embarked on.

According to the Coalition, it is poised to mobilize eligible voters to participate peacefully before, during and after the December elections and to also ensure a higher voter turnout of a targeted 80%.

It said that their intended objective was to conduct voter education against electoral violence and to monitor and observe the conduct of polls across the country towards and during the December 2020 general elections.

“The electoral commission’s mandate is to provide not only information but also education and assurances of adequate security to assist voters in exercising their civic responsibility to vote but since the electoral commission cannot do it alone, there is therefore the need for civil society organisations to support the education in getting citizen involvement to vote in the elections.”

The Coalition of CSOs in Governance and Security consisting of civil society organizations (CSOs) including youth and women’s groups, trade associations involved in governance and security, youth empowerment, media and human rights seeks to play a leading role in ensuring peaceful, fair and credible elections for the nation.

The group said that elections in Ghana were invariably plagued by localized violence such as threats, intimidation, physical assault, and vandalism of electoral materials that threaten the peace, security and stability of the country.

That election-related violence, the Coalition observed are routinely employed by the political class as an operational strategy or counter-strategy to obtain an electoral advantage, which has a proclivity to throw the country’s security out of gear.

The Coalition of CSOs in Governance and Security revealed that it would work with partners across all the 16 regions of Ghana and in all the 275 constituencies to mobilize eligible citizens to turn out to vote on election day without any fear of intimidation.

Indicating that, “We will conduct simultaneous Voter education and information campaign against electoral violence. The education will feature information on the prevention of violence and human rights violations; it will help deepen citizens’ knowledge about the electoral process and their electoral choices at the local level, and this will help reduce spoilt ballots whilst helping to make better-informed choices for citizens”.

The Coalition further indicated that the voter education against violence project would help the citizens to reject propaganda on radio and media stations and even reduce insults, vile messages, invective, ethnic incitement, use of hurtful language, vendetta on the airwaves and in print media by competing interest.