Elections Keep Coming: Build Your Muscles, But Build Your Brains Even More 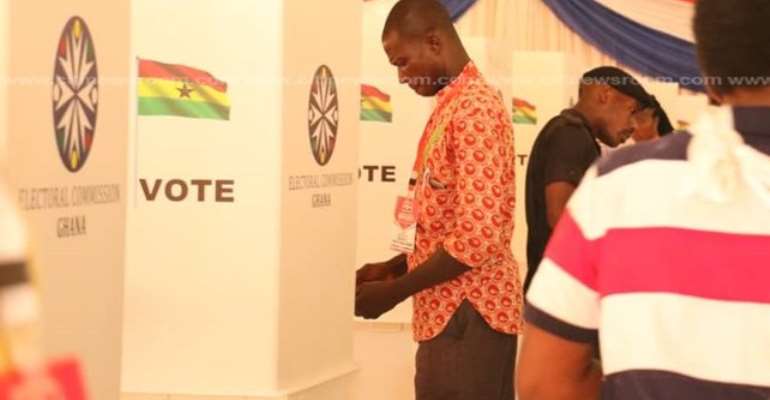 Agyaaku, nigh draws this year’s elections. It is incredible how many stories we have shared amongst ourselves; and it is just amazing how these stories pop up at applicable times. I just remembered two stories you told us. One is about your uncle, Opanin Stone, and the other is about your friend, Kwaapan. I remember how you said mighty Opanin Stone, in his youthful days, could single-handedly watch over our village, especially in the night, to keep everybody safe. I remember how you looked teary when you described how he needed help to move around in his advanced years.

Nana, I also do recall how you said Kwaapan angrily yelled at a guy who has been attacked by his political opponents on your way to vote, back in the 1950s. The reason, you said, was because strongman Kwaapan stepped in toward the attackers off, and in the course of that, the one being attacked drew a knife and flung it into one attacker’s belly. That angered no-nonsense Kwaapan who yelled “Really? Then you are on your own. I don’t care what they will do to you”. One can see that Kwaapan and Opanin Stone were tough guys if pictures are to be believed. I did not meet your uncle but I saw Kwaapan in his advanced age. He also needed time to move around in his old age.

Ahaa Agyaaku, do you remember the story I told you about a lecturer back in my days at the undergraduate level? Yes, the one in which in the middle of a lecture, the lecturer paused, looked through the window and shook his head despairingly. Seeing the workers managing the lawn in the scorching sun, and matching same to how much they earn, made him sad. He compared their earnings to his, and it made him even sadder. We concluded that most laborious and physical jobs don’t pay much.

These two scenarios got me thinking, Nana. It tells me muscle power is not enough. One needs to add value to oneself in order to earn more. According to Muscle and Fitness Magazine, the winner of Mr. Olympia (body builders’ competition) received $675,000 in 2013. And according to comparably.com, the average salary of a professional body builder in the USA is about US$32,000 per year. Comparatively, in the same jurisdiction, the average salary of a public teacher is $59,660 in 2016/2017; software developers raked in an average salary of $108,080 in 2018; and politicians (governors and lawmakers) earn between $70,000 and $190,000 per year. These graduated earnings across the stated professions in USA are not different in Ghana’s context, Agyaaku. Around the world, politicians, software developers, teachers and many other professionals that do not rely on muscle power earn more than bodybuilders or macho men (as we commonly call them in Ghana), Nana.

As such I have always wondered why these noble, able-bodied macho men will allow themselves to be used by politicians to unleash violence on their fellow men and women of the land, Agyaaku. In so doing, the politician gets his or her office, earns far more financially in a 4-year term than you, the macho man, will earn in your entire life. But how different is the politician from you the macho man? Perhaps it is because he or she has some academic or professional qualification, has had a good job or has been a successful business person. They thus wield some financial muscle, making them able to buy your biological muscle cheaply, to possibly bully their way to power. They ‘employ’ the macho men when they need to scare or cause mayhem at some point, mostly during election periods.

The politicians sit at the comfort of their homes or in their high-end vehicles, while macho men chase after, maim or kill their supposed enemies. Often times these macho men meet strong opposition and the tables turn, so they end up being chased after, maimed or killed, Agyaaku. This is a good reason why macho men should be weary of doing the dirty bidding of the politicians.

It is mind-boggling the extent these men of muscle power will go in risking their lives and the lives of innocent citizens just to please politicians, and in exchange: get little perks. What these macho men forget is that muscle power, just like political power, is not perpetual. They are both transient. Nana, you do remember our current republic started from 1992. It is 28 years old now, election-wise. We have had series of elections since 1992. There has always been macho-related violence in these elections, albeit at a decreasing rate.

So Agyaaku, those macho men who took part in acts of violence in the 1992 to early 2000s where are they? Granted they were in their early 20s to mid-40s when they were a real force to reckon with, how old would they be currently? Can they presently exude and exert the same power and force they used to in the 1990s, Nana? It reminds me of the sharp contrast between the pictures of the youthful Opanin Stone and Kwaapan, and the old Kwaapan I saw. Kwaapan’s bulgy muscles and their strength had deserted him in his old age, expectedly.

Agyaaku, the 1990s machos will be in their 60s and late 40s now. Like a lion kings, their reign over the pride is over. There are new lion kings roaring in the jungle, lording over the pride now. The fresh and strong macho men who are in their prime now have taken over. Oh yes, the babies, toddlers and early teenagers of the innocent men and women you scared, chased away, maimed or killed yesteryears are the current crop of macho men. They are the new deal now. The politicians will contract them instead of the macho men of the 1990s and early 2000s. And if these current men of muscle power do not change their ways, they will fall into same vicious cycle of electoral machoism where at some point they will be dethroned. I pray they change, Nana.

And why not change, especially that the change will put you among high earners? Agyaaku, the change, if possible, can even put the muscled men on the political high table where they can make decisions that will make the motherland a better place; a place where there will be no maiming, killing or frightening of innocent citizens because of politics. Arnold Schwarzenegger has done it before, Nana. Our macho men can also do it.

Thus, like Lucky Dube said in his song ‘Changing World’, Agyaaku: “The world is changing; take your time; look around; make the right decision”, Mr Macho Man. Our macho men can pursue an academic or a professional qualification, enter into business while they hobby on building their bodies. And if they choose to make body building their métier, they should do it in such a way that they can earn more in a better and dignified way than violence. They can legitimately offer services at mega-churches, marriage ceremonies, funerals, political functions, or feature in product advertisements, Nana.

So yes, Mr Macho Man you can keep training your muscles but look into ways of training your brain as well. They both pay, but the latter earns you more than the former, especially in your old age. I would love to see them relaxing and enjoying peacefully in their old age just as you are currently doing, Agyaaku. Please keep sipping your dudo, Nana.

I consult in international development planning, project management, monitoring and evaluation, corporate social responsibility, sustainability. I also have expertise in organizing and leading family owned businesses (FOBs). I also provide services for setting up and management of websites.