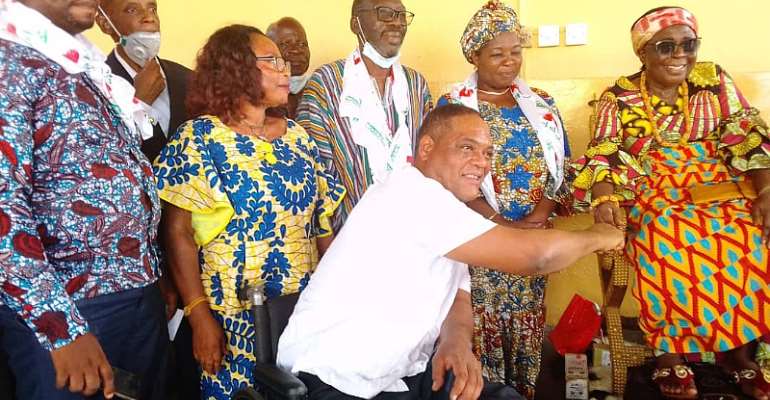 The Convention People's Party (CPP), as part of its campaign tour on Thursday, 26th November 2020 paid a visit to the Queen mother of Akuapem, Nana Afia Nkatia Obuo (II), and the overlord of Accra, His Royal Majesty, King Tackie Teiko Tsuru (II).

This was to officially seek indulgence and blessings ahead of the December general polls as well as present its well-constructed manifesto which highlights "Rebuilding Ghana By Restoring Trust In Government".

The Presidential Candidate for the CPP, Ivor Greenstreet, in his speech at Akropong, stated that his party has outlined important projects in the agricultural sector for the people of Akuapem.

"The CPP has fantastic programs for the people of Ghana. In particular, if you look at Akuapem end, I believe there is a large farm of oil plantation here. In our manifesto, we have something we call Cocoa mirica, and we are going to make that Cocoa mirica available to all our agricultural products in particular to begin with some of our key cash crops," he said.

"The only reason why cocoa has succeeded is that the government gives guaranteed rights to the cocoa farmers. So you know, if you grow something for five to seven years and you are given assistance, you are given fertilizer, you are given loans after that seven years you will reap the benefits.

The same way will be done under the Convention People's Party for cassava and other cash crops like oil palms which our research has shown can manage the sector," he stressed.

The Queenmother, Nana Afia Nkatia Obuo (II), in her remarks encouraged the party to eschew violence before during, and after the elections.

"I don't have much to say but I want to advise you to promote peace and unity among Ghanaians as we prepare towards the elections.

"When there is peace you can do everything. We all know what Kwame Nkrumah came to do so we are not surprised but all we want for the CPP members is peace among them," Nana Afia Nkatia Obuo (II) said.

She also called on Ghanaians to rally behind the CPP party to ensure total victory.

"All that he has said, I am sure he will deliver so when it is time to vote and choose your presidents make sure you choose wisely and vote for the CPP and Ivor Kobina Greenstreet," she urged.

The Chairperson and Leader of the CPP, Nana Frimponmaa Sarpong Kumankuma, disclosed that the party has initiated an insurance package as part of its plans.

"You are also entitled to 400 cedis every month for a year in case you have injured as well as 2500 cedis for not being able to record," she revealed.

The party presented some items to the Queen which includes assorted cartons of soft drinks, cartons of bottled water, schnapps, and an undisclosed amount of money as well as bottles of schnapps.

At a tour to the Ga Mantse His Royal Majesty King Tackie Teiko Tsuru (II) palace in Accra, the CPP presented it 2020 manifesto as well as announced plans of providing sustainable job and developing of infrastructures in the business district.

On his part, the Ga Mantse, King Tackie Teiko Tsuru (II) assured the CPP of his blessings and encouraged the party to promote unity and peace ahead of the elections in December.

The party also presented cartons of soft drinks, cartons of bottled water, and schnapps to the king.

Encroachers on KNUST lands will face my wrath — Otumfuo war...
41 minutes ago