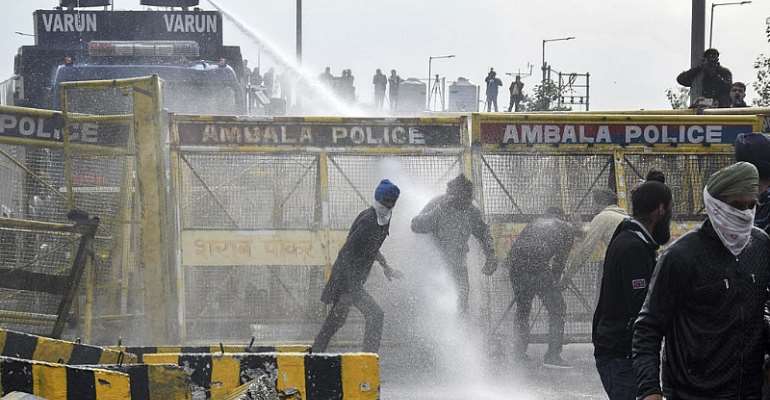 Armed policemen fired tear gas and used water cannon as thousands of farmers marched to India's capital to press on with a campaign against new laws which they say will benefit only rich corporations in the farm-dependent country.

Farmers waving banners and flags tore down iron barriers and clashed with the police on several highways into Delhi, as they rode down from the two nearby states of Haryana and Punjab.

At least one group riding farm tractors and motorcycles battled its way through roadblocks and barbed wire fencing and made its way into the Covid-ridden capital city's Burari industrial district, eyewitnesses said from one border entry point.

A Delhi police spokesman said the protesters had been given “safe passage” to a public park on the outskirts of the capital, but it was unclear if the farmers had accepted the offer as thousands more clogged inter-state motorways.

An unspecified number of them were also hurt in the clashes.

“We have smashed through each and every police barricade on our way to Delhi, and nothing the government does now can stop us from picketing the city,” said Trilochan Singh, leading a group from Punjab.

Avtar Singh Ramgharia from Sikhism's holiest city of Amritsar said his group of 15 protesters was carrying enough food rations to last them for “six months”.

“We will camp in Delhi if necessary for six months to fight against these black laws,” he said after the 450-kilometre road trip from Amritsar.

India's Hindu nationalist government insisted the laws enacted in September will bring benefits to farmers as they will be free to sell their produce directly to private companies at a price of their choice.

Farm workers' unions, several producers and most opposition parties argue the legislation will leave small growers at the mercy of powerful corporations.

They also fear the government of Prime Minister Narendra Modi will eventually eliminate the policy of price support for wheat and rice.

But Modi's ruling BJP party said it will not dismantle the wholesale markets that protect the interests of hundreds of millions of farm-dependent people in India.

“The laws empower farmers with small holdings and it seeks to increase farm income . . . the only ones who will not benefit are the middle men,” the BJP's Rajkumar Chahar said.

“Everything is being taken away from the farmers and banks, loan waivers, airport, railway stations are being distributed to the capitalists,” Congress party leader Priyanka Gandhi Vadra said in a tweet in Hindi.

“The government, instead of listening to the voice of the farmers protesting against the laws …, is attacking them with water cannon," she added.

The prime minister's party spokesman Amit Malviya accused the Congress of inciting farmers with the help of outlawed extremist Sikh organisations from Punjab.