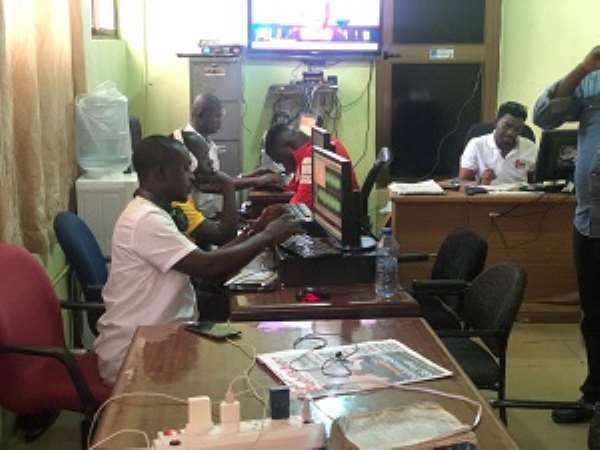 The National Media Commission (NMC) on Thursday, November 26, 2020, paid a working visit to a Kumasi based private radio station, OTEC FM, and showered massive praise to the media house for the pioneering role played in contemporary broadcast journalism in Ghana.

According to the NMC, the birth of OTEC FM, the first FM station in Ghana initiated by its late magnificent Director, Mr. Oppong Twumasi set the pace for the liberalization of a private radio stations in the Country.

Expressing his satisfaction to the staff of the station, the Executive Secretary to the National Media Commission NMC, George Sarpong thanked the private radio broadcasters for the provision of platforms to Ghanaians to express their opinions and also to be abreast with government policies towards national development.

"The station is the pride of place in the broadcast industry and so, therefore, urge any individual who gets the opportunity to work here to be proud to have belonged to such a prestigious institution"

The Radio firm which was established in September 1996 under Oppong Twumasi Electronic Company Limited, OTEC, the broadcast giants have become the premier radio station in Ghana.

The companies which deal in electronics manufacturing, operate an FM station, and a journalism school is known for developing the first-ever local transmitter in Ghana under the leadership of late Mr. Oppong Twumasi, founder of OTEC.

Mr. Sarpong accompanied by the Chairman of the Commission, Yaw Boadu Ayeboafoh as well as the president of Ghana Independent Broadcasters Association GIBA Andrew Danso Ankomah, visited OTEC to assess the preparedness by the institution towards December polls.

Recalling how OTEC Radio has helped the country on the implementation of its developmental policies, Mr Goerge Sarpong said the radio was the first and the only one that disseminated vital information to millions of people across the Ashanti region and Ghana as a whole.

"The radio (OTEC FM 102.9MHz) has carved a niche for itself since its inception and we the NMC has begun writing a befitting history for them in our archives for generations unborn”, he noted.

Mr Sarpong again said the company can boast of providing labour for almost all the radio stations in Ghana now, adding that, its program schedule and content creations have become a blueprint for most of the radio and television stations as well.

Mr George Sarpong has therefore, cautioned journalists to avoid being used as conduits for the propagation of fake news adding that journalists must be professionals and do their work in the way that they were trained to.

“We must watch out against the circulation of information that has not been confirmed. Indeed, it is one of the greatest threats to our profession in the midst of the pandemic….,’’ the Executive Secretary of NMC said.

“We are not just social media commentators. We are the professionals who are discharging the responsibility of providing information that is necessary for the education of our people. What it means, therefore, is that it is not every information that we see on social media that we must replicate,” he warned.

Mr. George Sarpong noted that journalists were not under any obligation to publish anything that came their way, adding: “If we do that then there is no difference between us and those who have no profession whatsoever. But our claim to freedom is the fact that we serve the interest of our people.”

“We do not owe an obligation to anybody, our primary obligation is to ourselves, to ensure that we live our profession and practice it the way that it is supposed to be practiced so that we continuously remain relevant to the development of our society,” Mr. George Sarpong stressed.

He said though no one knew the scientific perspective of the genesis of the COVID-19 that should not make journalists buy into any information that came their way without seeking factual clarification of that piece of information before passing it on.