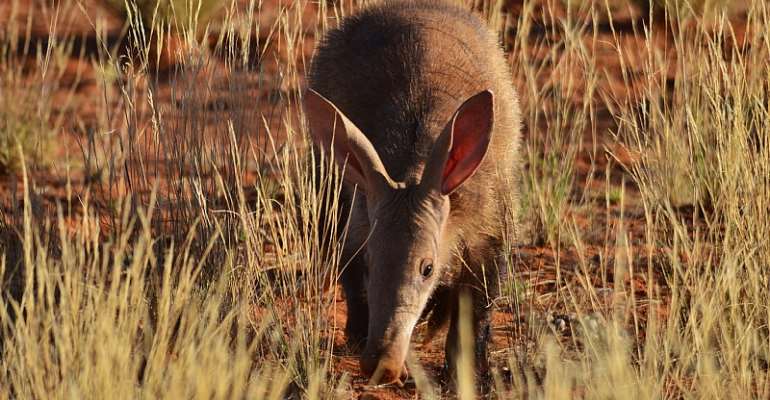 Disappearance of aardvarks from dry ecosystems could have devastating consequences for the many other animals that rely on their burrows. - Source: Kelsey Green

Aardvarks are notoriously elusive, nocturnal mammals. They generally hide in their underground burrows during the day and emerge at night to feed exclusively on ants and termites. Aardvarks are widespread throughout most habitats of Africa south of the Sahara, except deserts. But their actual numbers are not known because they're so elusive.

Aardvarks top the bucket list of many wildlife enthusiasts, but few have been fortunate enough to see them – until recently. Daytime sightings of aardvarks are becoming more common in the drier parts of southern Africa. But seeing them in the daytime does not bode well because it indicates they might not be finding enough food.

To understand how aardvarks cope with hot and dry conditions, we studied them in the Kalahari, one of the hottest and driest savannah regions in southern Africa in which aardvarks occur. Our study took place at Tswalu, a private reserve in South Africa that supports research through the Tswalu Foundation . We equipped wild, free-living aardvarks with biologgers (minicomputers) that remotely and continuously recorded their body temperature (an indicator of well-being in large mammals), and their activity. Each aardvark also received a radio-tracking device, allowing us to locate them regularly. Tracking the aardvarks provided clues on how they changed their behaviour in relation to environmental stressors in the different seasons and years of our three-year study.

Our study found that in drought periods, aardvarks struggled to find food. It was difficult for them to maintain their energy balance and stay warm during the cool night, so they shifted their active time to the day. Some died from starvation. Given the aardvark's importance to ecosystems, these findings are a concern. Aardvarks usually emerge from their burrows at night (left), but during drought periods, they are increasingly seen during daytime (right). N. Weyer

No other mammal in Africa digs as many large burrows as the aardvark. Dozens of mammals, birds and reptiles use aardvark burrows as shelter from extreme heat and cold, protection from predators, or a place to raise their young. In many of South Africa's conservation areas , temperatures have already risen by 2℃ over the past 50 years. Further warming by 4-6℃ by the end of the century has been projected.

With deserts and drylands expanding across much of Africa, climate change might threaten the aardvark itself as well as the many animals reliant on aardvark burrows as a cool shelter from rising temperatures.

During typical years, aardvarks were active at night and were able to regulate their body temperature between 35-37℃. Aardvark active at night during non-drought times. adapted from Weyer et al., 2020, Frontiers in Physiology, https://doi.org/10.3389/fphys.2020.00637

However, this pattern changed during two severe summer droughts that occurred in the Kalahari during our study. During the droughts, aardvarks shifted their activity to the daytime and their body temperature plummeted below 30°C.

Using remotely-sensed vegetation data recorded by NASA satellites and our own camera trap footage and logger data, we showed that these dramatic changes in body temperature and activity of aardvarks were related to the availability of grass, on which their ant and termite prey rely. When grass was scarce during droughts, the ant and termite prey became inaccessible to aardvarks, preventing them from meeting their daily energy requirements. As their body reserves declined, aardvarks were unable to sustain the energy costs of maintaining warm and stable body temperatures and shifted their activity to the warmer daytime. Aardvark active in the daytime during drought. adapted from Weyer et al., 2020, Frontiers in Physiology, https://doi.org/10.3389/fphys.2020.00637

Shifting activity to the warmer daytime while food is scarce can save energy that would otherwise be spent on staying warm during cold nights. But, for our aardvarks, even these energy savings were insufficient during drought, when the ground was bare and the ant and termite prey inaccessible. As a result, seven of our twelve study aardvarks and many others died, presumably from starvation.

A bleak future for aardvarks in a hotter and drier world

On the Red List of Species of the International Union for Conservation of Nature, aardvarks are currently categorised as a species of “ Least Concern ”. However, we consider aardvarks to be threatened in the drier parts of their distribution in Africa, such as the Kalahari, where climate change brings about droughts . Disappearance of aardvarks from these ecosystems could have devastating consequences for the many other animals that rely on the aardvarks' burrows.

We hope that our findings will raise further awareness about the consequences of climate change and inform future wildlife conservation and management decisions. Such steps might include assessments of the actual population status of aardvarks across Africa, or mitigation measures to preserve species that depend on burrows for refuge in regions where aardvarks might go locally extinct. More extensive measures, like water-wise reserve management, increasing sizes and connectivity of nature reserves in semi-arid regions, and reducing emissions to mitigate climate change, are just as urgent.

Finally, any solution to the plight of climate change on free-living animals requires a better understanding of their capacities to cope with drought. Therefore, many more long-term comprehensive studies are needed on the physiology and behaviour of the vulnerable animals living in hot, arid regions of the world.

Nora Marie Weyer does not work for, consult, own shares in or receive funding from any company or organisation that would benefit from this article, and has disclosed no relevant affiliations beyond their academic appointment.

By Robyn Hetem, Senior Lecturer, University of the Witwatersrand And

"Greater Accra NPP is poised to recapture all lost seats in ...
43 minutes ago