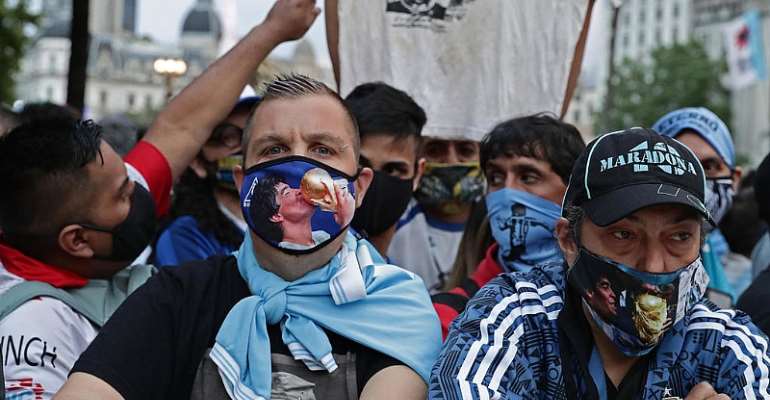 Some shook their fists, some bowed their heads and many simply wept as they filed past the coffin of Diego Maradona in Buenos Aires on Thursday as Argentina began three days of national mourning following the death of the national football team's former captain.

Maradona died on Wednesday at the age of 60 after a heart attack at his home in northern Buenos Aires.

His body was taken to the Casa Rosada - the presidential palace - where up to one million people are expected to pay their respects.

His closest friends were also among those to pay their respects before the start of the public wake.

Tens of thousands of people spent the night in a vigil in the Plaza de Mayo, singing songs in tribute to Maradona.

Homages
Homages continued to flow for the striker whose brilliance during matches was juxtaposed by his erratic behaviour off the field.

French champions Paris Saint-Germain said they would also mark Maradona's death in the same way before their match against Bordeaux on Saturday night at the Parc des Princes.

The Ligue 1 leaders said they would also show video highlights of the Argentine.

He added: “A piece of history together with our DIEGO thanks for everything my friend, we will miss you.”

In Italy, the daily sports newspaper La Gazzetta dello sport dedicated 20 pages to the highs and lows of Maradona after the headline Death of a football god. “Naples weeps. Farewell Diego, but nothing is over. Nothing and no one will ever be able to break the bond that united him to this city and its inhabitants," it said.

British reaction
The British newspapers all mentioned the 'Hand of God incident' for the first goal against England in the 1986 World Cup quarter-final in Mexico City.

Peter Shilton, the England goalkeeper in the match, wrote in the Daily Mail: “No, what I don't like is that he never apologised. Never at any stage did he say he had cheated and that he would like to say sorry. Instead, he used his 'Hand of God' line. That wasn't right. It seems he had greatness in him but sadly no sportsmanship.”

In the same paper, sports writer Martin Samuel added: “He will be remembered as the people's footballer. Not just standing in front of a battered fence as a child, clutching the ball that is his most prized possession, but because he played for clubs that have associations with the soul of the game. Boca Juniors, Barcelona, Napoli — people's clubs, passionate and intense, the way Maradona played and lived."

Jonathan Wilson in the Guardian said: "He was not merely a genius but one who came draped in symbolic importance. In his entire career, he was great for perhaps four seasons. There was nothing about him of Lionel Messi's relentlessness; his brilliance was dredged from obvious internal struggle.

"He had come from the potreros, he still played the game of the potreros, and he had won a World Cup by doing so; even better, he had done it against England.”