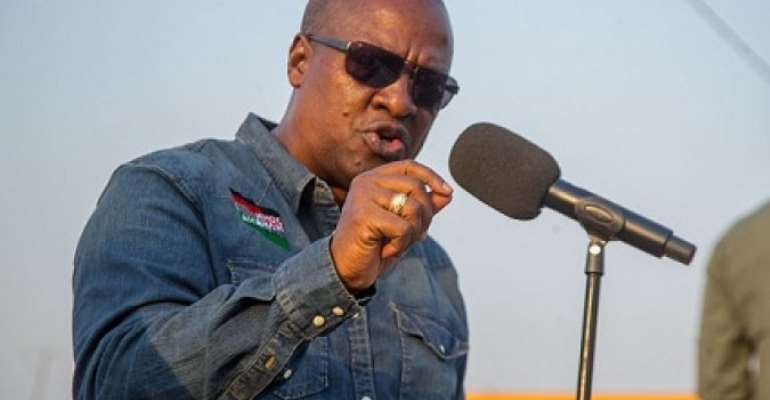 According to Mr. Mahama, the NPP “promised heaven but are giving Ghanaians hell,” and said the people should vote for him to come and reverse the trend.

He said Ghanaians should boot out the Akufo-Addo-led administration on December 7 because, in his view, the NPP coming to power “is the greatest scam in the country's political history.”

Mr. Mahama said the NPP in 2016 deceived Ghanaians into believing they were 'saints' and painted the NDC as 'evil' to the public to win their votes.

Upon assumption of office, Mr. Mahama said the Akufo-Addo administration had turned out to be the 'worst-ever'.

Campaigning in Navrongo in the Upper East Region on Tuesday, Mr. Mahama said Ghanaians must vote out the NPP government because their lives had retrogressed, saying, “If you vote for a government and it comes into power and the quality of your life is going in reverse, then you have to vote the government out.”

“This is the greatest political 'sakawa' in the history of Ghana because Ghanaians were made to believe in a certain packaged product and to see the NDC government as incompetent, as demons, as evil, as everything. And then they were a group of saints and angels who had just descended from heaven who were going to change everything in Ghana and make Ghana paradise,” he said, adding “instead of a paradise, they have turned Ghana into a hell-hole; because what happened to all the promises?”

“He (President Akufo-Addo) said Ghana was very sorrowful and we lived in wealth but were hungry; but are you not hungrier today than you were in 2016?” Mr. Mahama queried.

“He said we had money and could develop Ghana without going to borrow but from Nkrumah's time to the time Mahama left office, we left a debt of GH¢122 billion. Between 2017 and 2020, in four years, this government, Nana Akufo-Addo and his finance minister, have added to the debt GH¢157 billion and the question is: GH¢157 billion in four years, what do you have to show for it?” he fired.