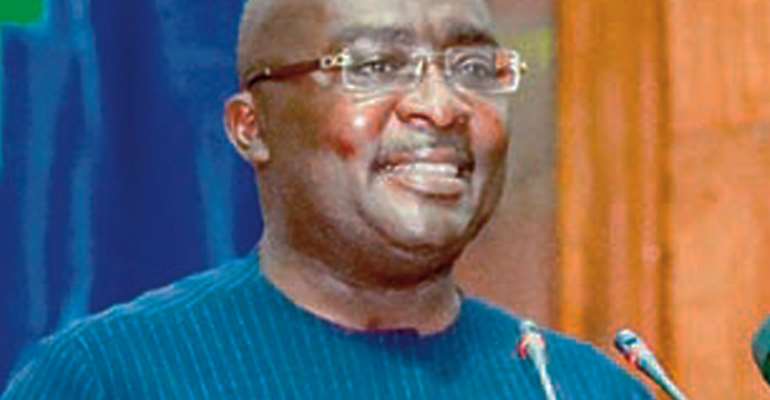 Vice President Dr. Mahamudu Bawumia will later today deliver a major address on the future of the country's economy as part of the Nation Building Updates (NBU).

In a press statement issued Wednesday and signed by the Deputy Minister for Information, Pius Enam Hadzide, the event would be held at the Cedi Conference Centre of the Department of Economics, University of Ghana, at 7:00pm prompt.

According to the statement, “The Vice-President will be expected to outline the various interventions and milestones achieved under the leadership of President Akufo-Addo within the three years and 10 months of his administration, and lay out the next steps going into the second term of the administration.”

The NBU is a weekly event organized by government under the auspices of the Ministry of Information to provide updates on key government projects, policies and interventions.

The session will be aired live on all major television, radio and new media platforms across the country.

Subsequent updates on other government events and programmes will follow in the coming weeks.

This evening's presentation will be the second of its kind for the Vice-President and the 12th in the NBU series. It is also expected to shed light on the some measures the NPP government has undertaken to rebuild the Ghanaian economy.

In his first presentation made at the Academy of Arts and Sciences, the Vice-President gave a detailed account of the infrastructural projects President Nana Akufo-Addo's government had undertaken over the past close to four years.