The Choice Between Light And Darkness: Buy Your Future With Nana Akufo Addo [Part1] 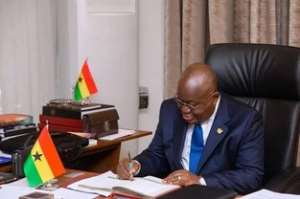 Another election year is at the corner and the political temperature is too high to the extent that our two major political parties; the New Patriotic Party (NPP) and the National Democratic Congress (NDC) have geared up to campaign massively to clinch victory in the upcoming 7th December, 2020 polls. This time round, the youth of this country have their destiny in their own hands to choose between light and darkness; that is the choice between a sitting president who is compassionate and has not eaten the meat to the bone and an ex-president who looks unconcern about the welfare of the citizenry and has eaten all the meat and left us only the bones.

No doubt the lives of the youth of this country was without hope under the so called social Democrats; the NDC who had always claimed they had the interest of the youth at heart with a sweet slogan “I care for you” and yet failed to address the plight of the Ghanaian youth anytime they are voted to power. The PNDC/NDC have been opportune to have 27 years to serve in government than any other party and yet have failed woefully to put things right to help build a country full of intellectuals whom no politician can play on their intelligence. The main reason why the NDC do not want our youth to be well educated is that it will be difficult to deceive them when they are well educated.

Ghana our beloved country would have been a true middle-income country by now but for the fact that we had bad managers, the NDC who never had any compassion for the good people of Ghana were only interested in adopting strategies that will always keep them in power to amassing wealth for themselves and their families by “create, loot and share”. President Akufo Addo’s government believes all over the world, economic growth is triggered by sound economic policies initiated and implemented by a competent and visionary leader like him who is eager to pull strings in order to turn the fortunes of the citizenry towards growth.

Surprisingly, the National Democratic Congress (NDC) because they also had short memory could not remember the 10 years’ time frame set for the Free SHS policy which was enshrined in the 1992 constitution was due for implementation in 2002. The Generational thinker dreamt yet another dream and thought it wise Ghana could not wait to implement the Free SHS policy that was why as soon as he won the Presidential primaries in 2008, made it clear Free SHS will be his government’s priority. He has in him the ‘can do’ spirit that is why he took a bold step in making sure every Junior High School leaver will have the chance to benefit from the Free SHS policy which naysayers who said it cannot be possible are benefitting.

PROPAGANDA AND LIES HAVE NO PLACE IN OUR CONTEMPORARY POLITICS

It’s worrisome to see the former president John Dramani who has tagged all Ghanaians as people who have short memory still dwell on propaganda and lies which have no place in our contemporary politics. The same person who used the taxpayer’s money to organize forty –seven (47) solid adverts on television to kick against Nana Addo Dankwa Akufo Addo’s Free SHS education to the extent of tagging it as 419 without shame has come out boldly to look to our faces and tell us he implemented it in 2015. Some politicians have taken Ghanaian electorates for granted for far too long and it is about time we made them understand that the fact that we give them our mandate does not mean they know better than we do and as such we deserve some respect because without our vote they cannot become leaders of this blessed nation.

INVESTING IN OUR YOUTH LAUDABLE

Ever since his good office implemented the Free SHS policy, we have not experienced Heads of our Senior High Schools running away from their debtors or closing down their schools all because feeding grants have not been provided by the government of the day unlike the era of the erstwhile John Dramani Mahama – led administration’s supposedly progressive Free education for only day students. The honest and caring president (Nana Akufo Addo) believes the future of every country is inextricably connected with how the upcoming ones are prepared to meet the challenges ahead of them and as such a country that fails to invest in its youth has no future that is why he wants to make Ghana a country full of intellectuals.

NDC claims that the Double track is like a traffic light and it has not benefitted our youth. If I may ask them when they are driving and the traffic light is red and it turns green do they stop their car engines and remain on the traffic or they move on to their destination? Their claim is a clear indication that they have little idea about the Double Track system by Nana Akufo Addo’s government is a mere conjecture. It is said, “You cannot give what you don’t have”. During their regime, there were lot of schools under trees and they did not tell those students and their teachers to stay home until they build them a new school. It means they know education of our younger generation cannot come to an end on the grounds of inadequate school buildings. Our Guinea fowls would not have fled to Burkina Faso if the NDC had thought it wise to build a poultry farm here in Ghana.