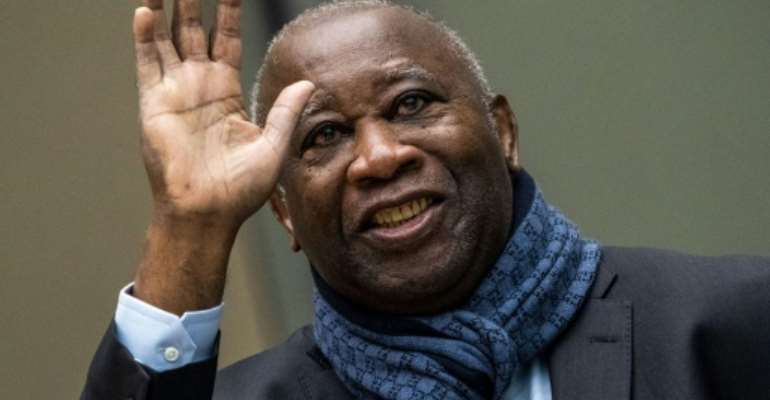 Former Ivory Coast President Laurent Gbagbo's (pictured February 2020) repatriation is one of the points under discussion between the government and the opposition. By Jerry LAMPEN (ANP/AFP/File)

The Ivory Coast government said Wednesday it was preparing to issue exiled former president Laurent Gbagbo a passport, opening the door for hs return to the country.

Gbagbo's repatriation is one of the points under discussion between the government and the opposition, which does not recognise the victory of President Alassane Ouattara at the October 31 presidential election.

Gbagbo, 75, is in Belgium awaiting the outcome of proceedings against him by the International Criminal Court (ICC) arising from a civil war sparked by his refusal to accept electoral defeat in 2010.

Government spokesman Sidi Tiemoko Toure said the issuance of Gbagbo's passport was "underway" after a meeting of the Council of Ministers.

Forced out of the country by forces loyal to Ouattara, Gbagbo retains a powerful following in Ivory Coast, but was barred by the country's top court from contesting last month's presidential election.

His lawyer, Habiba Toure, has in the past accused the Ivory Coast government of refusing Ouattara a passport to prevent him returning for the election.

The country has been mired in a crisis since President Ouattara, 78, announced he would seek a third term in office, triggering lethal clashes and reviving ethnic friction in francophone West Africa's biggest economy.

At least 85 people had been killed in election-related violence since August.

Since Ouattara was declared winner of last month's election, with more than 94 percent of the vote, the opposition has launched a campaign of "civil disobedience" and vowed to set up a transitional government.

Ouattara has said on several occasions that he is in favour of Gbagbo's return, and sources in the presidency say it had not gone unnoticed that Gbagbo did not join the opposition's call for civil disobedience".

Just before the presidential vote, however, in his first public comments since being toppled in 2011, Gbagbo warned in an interview with French channel TV5 Monde that the election spelt "disaster" for the troubled country, and called for dialogue.

Gbagbo was freed conditionally by the International Criminal Court (ICC) in The Hague after he was cleared in January 2019 of crimes against humanity.

He is allowed to leave Belgium, provided that the country he wishes to visit agrees to receive him.

Gbagbo was also handed a 20-year jail term in absentia by an Ivorian court last November over the looting of the Central Bank of West African States during the 2010-11 crisis.